Researchers see electrons in a spin

US researchers have measured the spin state of single atoms

Scientists in the US have successfully measured the spin polarisation state of single atoms adsorbed to a surface, bringing the prospect of quantum computing and spin-based electronics (spintronics) a step closer.

Michael Crommie, of the University of California, Berkelely, together with colleagues from Berkeley and the Naval Research Laboratory in Washington , DC, used vapour depostion to grow nanoscopic islands of cobalt on a copper surface and then sprinkled them with atoms of chromium and iron. 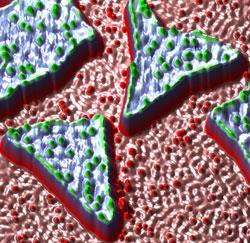 Normally, atoms are constantly flipping between ’up’ and ’down’ spin states because they are buffeted by the thermal energy of their surroundings. However, because the cobalt nanoislands are themselves magnetic, when an atom of Fe or Cr alights on the surface its spin becomes fixed - making their atomic spin easier to determine.

The researchers used a technique called spin polarisation scanning tunnelling microscopy (SPSTM) to measure the spin state of the chromium and iron atoms. In conventional STM, an electrical current is fired from the tip of an ultra-fine needle that is scanned over a surface. But in SPSTM, the current emerging from the tip is spin polarised - the electrons comprising the current are obtained from a magnetic coating around the tip and themselves have a net spin in one direction only.

’Effectively the atoms on the surface of the nanoislands resemble tiny bar magnets which are pointing either up or down,’ Crommie explained. ’The electrons coming out of the tip of the microscope are also like tiny bar magnets, all pointing with a net spin orientation. If these electrons are aimed at an atom that looks like a bar magnet oriented opposite to the electron spin orientation, then the electron current will be diminished. In this way we can measure the orientation - or polarization - of the spin of the atom.’

The researchers also noted that the polarity of the cobalt islands - some of which are magnetised ’up’ and others ’down’ - directly determined the polarity of the atoms sitting on their surface. This finding provides insight into the effect of magnetic coupling between quantum mechanical spins and an underlying substrate - something that will be important in the development of spin-based solid-state devices.

Commenting on the work, Sonia Schirmer, of the Centre for Quantum Computation at the University of Cambridge, UK, told Chemistry World, ’Measuring the spin states of individual atoms is a very challenging task, so any experimental demonstration of spin read-out in individual atoms strikes me as a significant achievement. While there is clearly a long way to go here, the work is an important step towards single spin read-out in atomic-scale systems.’