Metal oxide redox chemistry may be due a big re-think following new research by US scientists. It seems that it is not solely electrons that are being shunted about. In many, possibly most, cases a proton also comes along for the ride. 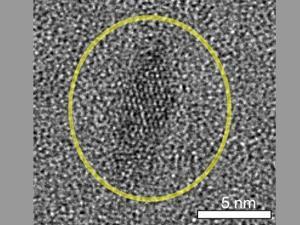 The finding, by James Mayer and colleagues at the University of Washington, Seattle, is likely to have significant implications for surface redox reactions where proton chemistry plays a part – using solar energy to split water or generate energy, for example.

However, Mayer concedes that the news will not be earth-shattering for many electrochemists. ‘People suspected that protons were involved, but had little sense of the underlying chemistry,’ he adds.

The researchers took conventionally prepared nanoparticles of titanium dioxide and zinc oxide dissolved in toluene. When these oxides are exposed to UV light they become loaded with electrons, donated from other molecules in the immediate environment. Two stable radicals were then introduced to each of the reduced oxides: 2,4,6-tri-tert-butylphenoxyl radical (tBu3ArO?), or the nitroxyl radical 2,2,6,6-tetramethyl-piperidin-1-yl-oxyl (TEMPO). This resulted in the formation of the phenol tBu3ArOH and the reduced hydroxyl amine TEMPOH, respectively.1 ‘These reactions can only have happened by the transfer of both an electron and a proton,’ says Mayer. The protons cannot have come from the solvent, toluene, which has no active protons. So where did they come from? ‘This is a really good question and one we are still working on,’ Mayer says. ‘For any material that has been exposed to the atmosphere there will by hydroxyl groups at the surface because of the ubiquity of water.’ The suggestion is that the same process that generates the reducing electrons at the surface of the oxide particles also generates protons. As the oxides become loaded with both electrons and protons, energetics dictates that where an electron goes, a proton goes with it.

Mayer believes that the phenomenon is likely to be general and not restricted to particular metal oxides or particular particulate preparations. ‘I am suggesting that electron transfer can be accompanied by a proton and that when you are doing chemistry at a surface that you know involves protons, such as water-splitting, then you need to take this into account. This may influence the way that people construct their ideas and go about the chemistry.’

Erwin Reisner, who researches artificial photosynthesis at the University of Cambridge, UK, says that the description of proton-coupled electron transfer in metal oxide materials ‘is particularly exciting in the context of renewable energy conversion. Research into smart materials that handle electrons and protons is the key to minimise heat losses in solar fuel cells, which often contain metal oxides.’