Transforming the most important attractive force acting between molecules into a repulsive one could enable US scientists to nearly halve the size of lithium-ion batteries. Massachusetts Institute of Technology (MIT) researcher Yet-Ming Chiang and co-workers have developed self-assembling batteries that exploit the van der Waals force to keep electrode materials separate rather than bringing them together.

A123Systems, the spin-out company Chiang co-founded, has applied to patent interwoven electrodes that can give electric car batteries the performance found in smaller thin-film devices.1 The company claims volumetric energy densities above 550 Wh/l, compared to around 300 Wh/l for rival bulk-scale products.

The name A123 refers to the Hamaker constant - used to describe the strength of the van der Waals interaction - between three different material phases. The Hamaker constant between two phases is always positive, denoting an attraction, but can be negative with three. ’If material two has a dielectric response intermediate between one and three, then a repulsive van der Waals force arises,’ Chiang told Chemistry World.

This can be exploited to create complex interpenetrating battery structures, where each phase remains continuously intact. ’What is interesting about batteries is that you want an electronically insulating, but ionically conductive electrolyte layer between two conductive electrodes,’ Chiang says. ’They fit into this concept of repulsive van der Waals forces because you have three dissimilar materials: cathode, electrolyte and anode.’ 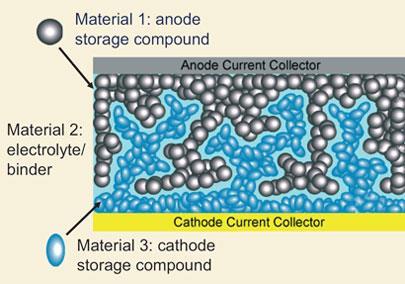 Chiang’s team selected conventional mesocarbon microbead and lithium cobalt oxide electrode materials for the first and third layers. They covered the carbon particles with metal to raise their dielectric responses, and the lithium cobalt oxide particles in coatings such as polyaniline or polypyrrole to lower theirs. A variety of solvents and polymers doped with lithium salts can be used as the electrolyte.

The interpenetrating network raises surface area of the electrodes compared to planar electrodes, and consequently also raises the energy density.   The space between the electrodes can be as low as 1?m, compared to around 100?m for conventional bulk batteries. This means that lithium ions and electrons don’t have to move as far, making charging and discharging the battery faster.

Paul Luckham of Imperial College London, UK, who has also performed research into repulsive van der Waals forces, notes that the devices might have been even smaller if an alternative to the carbon electrode had been found. ’Carbon particles are hard to fully disperse, limiting the size of the potential battery,’ he said.