Ribozymes that cooperate outdo autocatalytic rivals, supporting the idea that life evolved from an ‘RNA world’ 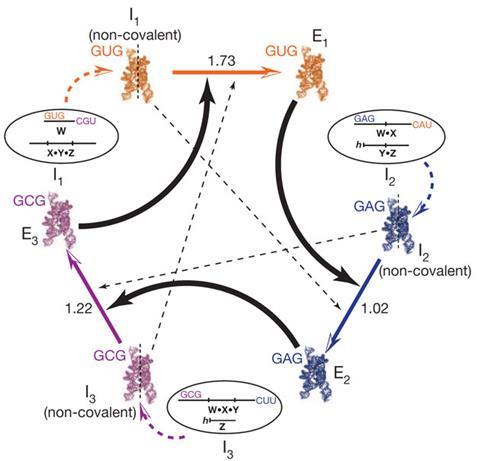 RNA molecules can team up to dominate more selfish rivals, in a way that might have allowed genetic information to survive in an early ‘RNA world’. Niles Lehman from Portland State University and his team have shown that cooperative ribozymes – RNA enzymes – outdo ‘selfish’ autocatalytic competitors for the same building blocks.1 ‘That says cooperation is an intrinsic facet to the origin of life and was a key step in going from chemistry to biology,’ Lehman tells Chemistry World.

The RNA world theory says that RNA both stored and catalysed reactions that reproduced genetic information in early evolution. But mutations or reactions that aren’t self-replication could easily halt individual molecules’ evolution. To avoid this, scientists proposed in the 1970s that RNA strands could work together, catalysing and reinforcing each other’s formation in a hypercycle network.2

In 2006 Lehman’s team broke a ribozyme from the proteobacteria Azoarcus into four fragments that could catalyse their own self-assembly.3 Having realised that their ribozyme could become part of a cooperative cycle, the chemists set out to produce a simple network comprising three different versions of it. Each version could only be correctly assembled from a specific pair of RNA fragments, but catalyses phosphodiester bond formation between a different pair.

For more complex networks, Lehman’s team produced front fragments with all four possible RNA bases in the middle position of each of the recognition sequences. Incubating all these randomised fragments with three ‘back’ partners provided 48 ribozyme combinations. After eight hours, the most abundant ribozymes in the mixture formed cooperatively, though selfish combinations persisted.

Lehman and his colleagues then used the same randomised combination, but extracted 10% of the mixture and introduced it to a new stock of starting fragments every hour. After one hour, 33% of the ribozymes were autocatalytic, but by 8 hours that had fallen to just 25%. Lehman notes that in both of the more complex network experiments, those changes are telling. ‘You can not only form networks, but the network structure, dynamics and interactions are evolving,’ he says. ‘These are chemical dynamics that are starting to manifest informational characteristics. We’re looking at interactions that change over time, which start to capture the essence of life.’

Phil Holliger from the MRC Laboratory of Molecular Biology in Cambridge, UK, who has worked on non-DNA polymer evolution disagrees that these dynamics evolve. ‘But they clearly develop over time and that raises interesting questions,’ he says. ‘Is more interconnection better than less interconnection? This area of RNA systems chemistry is going to be very interesting to follow up.’

Gerald Joyce from the Scripps Research Institute in La Jolla, California, who has studied ribozymes’ role in the RNA world, calls the work ‘fascinating’. ‘This is the first paper to dig into what I would call the birth of molecular ecology, how these catalytic entities play off of each other,’ he says. ‘Do they fight tooth and claw? Or do they cooperate? They’ve shown, with real molecules, that they cooperate.’