Military researchers in the US have developed a novel ’green’ rocket fuel whose constituents are less corrosive and toxic than those used in conventional propellant systems.

Rockets are typically powered by bipropellant systems, where a powerful oxidising agent reacts with a fuel to spontaneously ignite, a reaction termed hypergolic. Oxidisers include nitric acid or dinitrogen tetroxide, which are corrosive and release toxic fumes, with fuels such as hydrazine, which is also poisonous and highly unstable.

’One of the important requirements in the development of less hazardous liquid bipropellants for rocket propulsion is reduced vapour toxicity of oxidiser and fuel,’ says propellants expert John Bellerby of Cranfield University, UK. ’This is not easy to achieve while maintaining good ignition characteristics and high performance.’ Bellerby adds: ’Hydrogen peroxide is an attractive low-hazard alternative oxidiser but finding a fuel with low vapour toxicity that is hypergolic with this oxidiser and also produces a high performance has proved difficult.’ 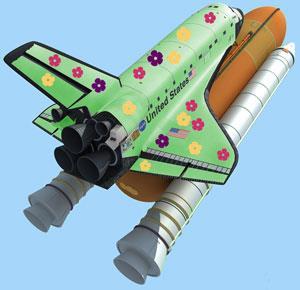 Stefan Schneider and colleagues at the US government’s Air Force Research Laboratory at Edwards in California believe they may have solved this problem using a hydrogen-rich ionic liquid - a salt that is in the liquid state - as fuel with hydrogen peroxide as the oxidiser.

The use of ionic liquids to liquefy metal hydrides for use as a fuel has been tried before, but their reactivity has been insufficient. Schneider’s team reasoned that combining an ionic liquid with aluminium borohydride to create complex anions, such as Al(BH4)4-,would, in effect, create a densified form of hydrogen stabilised by metal ions.

The researchers took trihexyltetradecylphosphonium (THTDP) chloride and substituted the chloride anion with a borohydride anion. The subsequent (THTDP)BH4 was reacted with an excess of aluminium borohydride to produce a room temperature ionic liquid incorporating  Al(BH4)4-. In tests, this was shown to react hypergolically with hydrogen peroxide. ’This new class of ionic liquids holds the potential for enabling high-performing, non-cryogenic, green bipropulsion for the first time,’ the researchers say.

Bellerby agrees: ’As an ionic liquid the fuel has very low vapour toxicity and the authors have demonstrated that it is hypergolic with hydrogen peroxide. These properties, together with the high hydrogen content, which will mean a high performance with oxidisers, make the fuel an attractive option for future low hazard liquid bipropellants.’