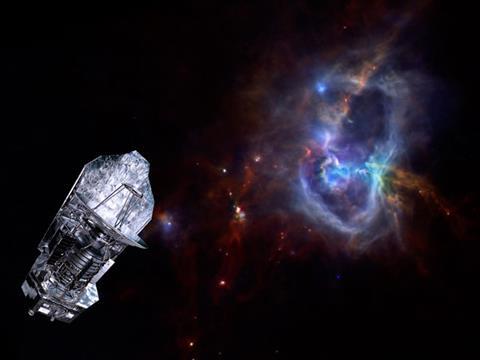 Scientists have pushed low-temperature experimentation and computational chemistry to their limits to better understand hydrogen fluoride, which astronomers use to study regions of space that are otherwise hard to image.1  Ian Sims and Sébastien Le Picard from the University of Rennes, France, and co-workers measured HF formation down to 11K using supersonic hydrogen streams shot from rocket engine-like nozzles. ‘It’s the first measurement of a simple gas-phase chemical reaction occurring by quantum mechanical tunnelling at such low temperatures,’ Sims tells Chemistry World. The team’s results show existing astronomical models overestimate how rapidly HF can form, meaning there could be up to twice as much hydrogen in interstellar clouds as previously thought.

These interstellar clouds are mostly made up of hydrogen at temperatures from 10–100K. But without magnetic dipole moments the hydrogen molecules don’t interact with radio waves and, therefore, can’t be spotted by astronomers. In 1997, David Neufeld at Johns Hopkins University, US, discovered small amounts of HF in space2, thanks to the fact it does have a dipole moment. Astronomers can therefore study interstellar clouds indirectly using models of the reaction that produces HF, explains Neufeld, who wasn’t involved in this new study. ‘HF is one of two main hydrogen tracers that have been used to interpret a significant amount of astrophysical data from the Herschel space observatory,’ he says.

HF is only found in space as the result of a reaction between a fluorine atom and molecular hydrogen. In an entirely classical reaction these starting materials need to take in energy to pass through a less stable intermediate state, before rearranging into HF and a hydrogen atom. Heat is usually needed to cross this energy barrier, and therefore low temperatures should slow such a reaction to a standstill. But the small mass of hydrogen atoms lets reactions occur via quantum mechanical tunnelling, even in the cold of space.

This HF formation route is iconic and commonly measured in reaction dynamics, but it had previously only been studied experimentally down to 190K. Its behaviour at lower temperatures had been modelled computationally, including the boost from tunnelling, but these predictions hadn’t been confirmed. ‘Quantum mechanical tunnelling is very difficult to calculate precisely and no measurements existed, so there was a lot of uncertainty about this rate of reaction,’ Sims notes.

It is rocket science

To investigate low temperature reactions the Rennes team uses de Laval nozzles, which are also found on rocket and jet engines. They pump out a supersonic gas jet that expands rapidly, with that expansion in turn cooling the flow to very low temperatures. ‘In our hydrogen flow there’s a very small trace amount of fluorine that doesn’t itself react with hydrogen,’ Sims explains. ‘Then we fire the first laser which breaks apart some of that fluorine to give fluorine atoms. Those atoms then go on and react – or not – with the hydrogen. We follow that process through fluorescence with a second laser.’ 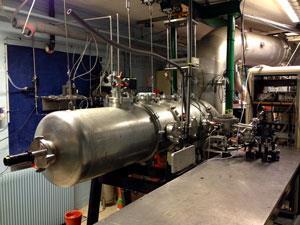 Measuring the rate of the reaction at four temperatures – 295K, 77K, 20K and 11K – the chemists found low temperature reactions happened much slower than predicted. Showing those findings to computational chemists Millard Alexander at the University of Maryland, US, and Francois Lique at the University of Le Havre, France, drove them to produce better calculations. ‘Those are probably the highest level quantum calculations that have ever been performed on a simple reaction,’ Sims says. ‘Our work pushed them to the limit, and showed that you do actually need to go to this very high level.’

Neufeld is most impressed by the ‘important’ laboratory result. ‘The amount of molecular hydrogen inferred from earlier observations of HF will have to be revised upwards,’ he admits. ‘It's a nice demonstration of how laboratory measurements of fundamental chemical processes can be critical to a proper understanding of the astrophysical universe.’

‘This is a wonderful paper that breaks new ground,’ adds Roman Krems, at the University of British Columbia, Canada, part of the team that calculated the previously-used HF formation rates. ‘It demonstrates, for the first time, that chemical reactions with barriers can have significant rates at temperatures as low as a few Kelvin. It also demonstrates that first-principle quantum calculations of reaction rates at such low temperatures can be used for quantitative predictions.’