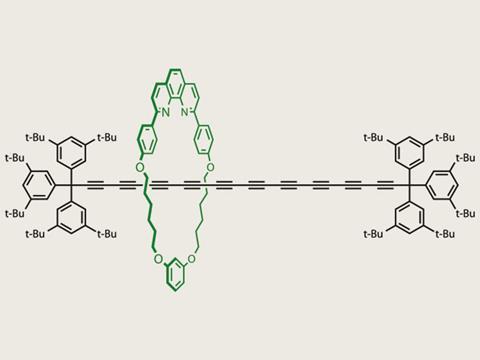 Straight rods of carbon linked by alternating single and triple bonds have long interested chemists both as a new type of carbon structure and as molecular wires. Two teams have now succeeded in stabilising these polyynes by threading them through a molecular ring, creating a rotaxane. This could open up the possibility of using these compounds as wires in molecular electronics.

As polyynes longer than four carbon atoms are highly reactive, researchers were at first only able to produce them in extremely dilute form. In recent years several groups have created polyynes in which both ends are capped with very bulky molecular groups such as the ‘super trityl’ (tris(3,5-di-tert-butylphenyl)methyl) group. However, this type of protection fades as the chain becomes longer.

Now, a team headed by Harry Anderson, at the University of Oxford, UK, and Rik Tykwinski, at the University of Erlangen, Germany and another led by John Gladysz at Texas A&M University, US, have simultaneously succeeded in creating longer polyynes with a ring wrapped around the shaft to protect and insulate them. Both efforts have used the same kind of ring and very similar reaction conditions, based on the help of a copper ion coordinated by the inside of the ring.  For the thread, Gladysz used a rod of eight carbon atoms shielded at both ends with metalorganic groups centred around platinum atoms.1 By contrast, Anderson’s polyynes cover a range of lengths from eight to 20 carbon atoms and are stoppered at both ends with super trityl end groups, which are pure hydrocarbons.2 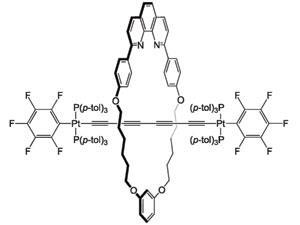 ‘The idea of making rotaxanes as a way of stabilising and solubilising a long polyyne chain has been around for a long time, so it is exciting that we now have a synthetic route to such structures,’ Anderson tells Chemistry World. Both groups characterised the rotaxanes with a range of structural analyses including x-ray crystallography and NMR.

Steve Goldup from Queen Mary, University of London, UK, praises both papers and says: ‘The approach developed independently by the two groups is potentially extremely flexible and should allow the systematic synthesis and investigation of novel insulated electronic materials with exciting properties.’

Jean-François Nierengarten from the University of Strasbourg, France, also welcomes the advances and points out that ‘these proofs of concepts pave the way towards the preparation of very long and stable polyyne derivatives approaching more and more the ideal […] carbon allotrope, carbyne.’