Chemists have long known how to build and break carbon–carbon double bonds. But now, researchers at the Institute of Chemical Research of Catalonia, Spain, can ‘expand’ them by inserting a new carbon atom between them. This remodelling of organic skeletons using rhodium carbynoids could open up a myriad of new possibilities in the preparation of bioactive compounds, agrochemicals and materials. 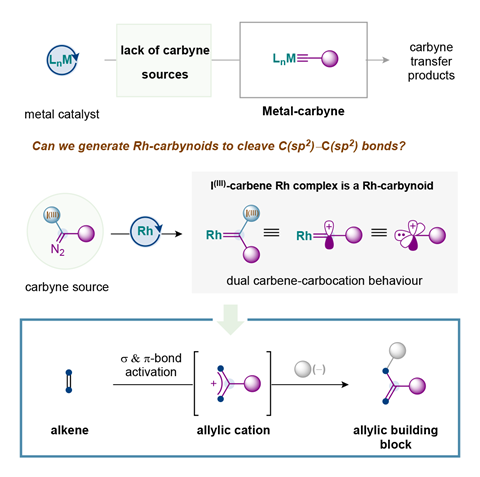 ‘Editing organic molecules by inserting atoms between carbon–carbon is an unexplored synthetic tool,’ explains Marcos Suero, who led the study. ‘[And] this is the first time that a monovalent carbon is inserted in [between] a carbon–carbon double bond,’ he adds. ‘Moreover, we managed to do it in a catalytic fashion.’

Cristina Nevado, a synthetic chemist at the University of Zurich, Switzerland, who was not involved in this work says that ‘other well-known processes [exist] for the catalytic cleavage of carbon–carbon bonds’. However, she is impressed by the way in which this one ‘inserts a new [carbon atom] between the two original carbon centres’. ‘It allows the catalytic cleavage of carbon–carbon [double] bonds in a wide range of substrates, [inserting] a large range of nucleophiles under mild reaction conditions,’ she adds.

Rhodium carbynoids are synthetic equivalents of cationic monovalent carbons. ‘They are new organometallic species that allow us to insert complexity into feedstock alkenes, styrenes and natural products by breaking their skeletons,’ says Suero. His team generated the rhodium carbynoids using hypervalent iodine reagents and catalytic amounts of rhodium(II) as precursors. Metal carbynoids are versatile tools for synthetic chemists as they ‘display unique properties’, explains Nevado. ‘The [monovalent] carbon atom shows reactivity patterns that resemble both a carbene and a carbocation,’ she adds.

Suero says that ‘this methodology represents a new platform for carbyne transfer processes … and will allow chemists to reach valuable allylic building blocks faster’. Using this strategy, Nevado says, chemists ‘are able to transform alkenes into challenging tetra-substituted olefins, motifs present in many relevant bioactive molecules’, including breast cancer treatments such as tamoxifen.