Scientists in the US have shown that the end of the last age 19,000 years ago began in the higher latitudes of the southern hemisphere before sweeping into the tropics.

The finding confirms previous data that elevated levels of carbon dioxide in the atmosphere lagged behind the initial warming event - by about 1000 years - and that the principal driver of climate change is the sun, with carbon dioxide ( CO2 ) amplifying the effects.

Lowell Stott of the University of Southern California, and colleagues Axel Timmermann and Robert Thunell measured oxygen isotope ratios in bottom-dwelling and surface-dwelling ocean organisms from cores of sediment taken from the western Pacific. The ratio of 18O to 16O in the calcite shells of the organisms varies depending on the prevailing temperature.

The researchers showed that the temperature in the deep ocean increased before that of the surface, and that this rise occurred around 19,000 years ago - 1,000 years before levels of CO2 were seen to rise. The warming deep water apparently originated in the Antarctic Ocean, with melting Antarctic sea ice coinciding with increased springtime solar radiation over Antarctica. 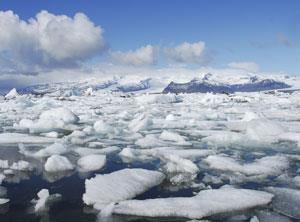 Commenting on the work, Robert Mulvaney of the British Antarctic Survey told Chemistry World, ’This paper confirms what we already suspected, that climate at the very long timescale is driven by temperature increases brought about by the orbit of the Earth around the Sun which warms up the deep ocean and that this in turn releases carbon dioxide into the atmosphere which amplifies the temperature increase.’

The paper sheds important new light on where the temperature increases originated on the surface of the Earth and gives more detail on the chronology of events, Mulvaney said.

Francis Otieno of the Polar Meteorology Group at Ohio State University, said, ’What the study demonstrates is that deep sea warming led the CO2 increase, the resulting ventilation of the deep sea would have released more CO2 and enhanced deglaciation; this in my view reinforces our perception of the role of positive feedbacks in climate change when we consider this study together with other recent published work.’

Dick Kroon, Regius Professor of Geology at University of Edinburgh, UK, said that the research is ’important for understanding the primary driver of climate change from the glacial to the interglacial period, but not necessarily for driving climate change in the near future’.