Seaweed recruited in fight against malaria

Many drug molecules are natural products, including quinine, arguably the ’original’ anti-malarial, which comes from the bark of the cinchona tree. This has driven scientists to search for new compounds in all corners of the natural world.

Now, Julia Kubanek at Georgia Institute of Technology, US, has shown that large macrocyles from Fijian red seaweed could lead to new drugs for the treatment of malaria. She presented her work at the annual meeting of the American Association for the Advancement of Science. 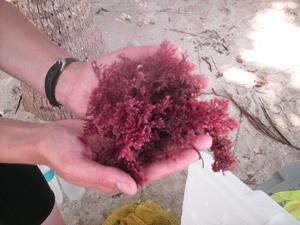 The compounds, called bromophycolides, were first isolated in 2005, and researchers have since proved they have moderate activity against cancer cell lines. But it was during a recent collaboration with cell biologist Karine Le Roch at the University of California, Riverside, that the bromophycolides were tested against malaria. ’We thought wow, maybe there is something here after all’ says Kubanek.

When added to infected blood, bromophycolide A concentrates in infected cells and kills the parasite, while leaving healthy cells unharmed. It does this by preventing crystallisation of heme, which is a waste product of the malaria parasite. Heme is toxic to cells, and usually the malaria parasite crystallises it into hemozoin, a non-toxic form. Bromophycolide A disrupts this process.

At the moment bromophycolide A is not as potent as artemisinin, currently the most commonly used anti-malarial. But Kubanek and other researchers elsewhere are now working to find more effective variants. In Kubanek’s lab, the purified natural product has already been modified. Meanwhile, over in the chemistry department, colleagues are working on the total synthesis and more targeted variation.

’What we really know is that these compounds are able to kill malaria in 96 well plates,’ says Kubanek. ’But we need to show that the drug could work in a mammal.’ Therefore, next week, work will start with animal models, with hopes for a more potent analogue from the chemistry lab to use soon.