For the first time, tuberculosis can be detected and tracked through the body, using a simple sugar based molecule.

Using a sugar that is found in tuberculosis but not humans, Clifton Barry of the US National Institute of Allergy and Infectious Disease in Bethesda, and Ben Davis from the University of Oxford, UK, have created the first probe to selectively label live tuberculosis (TB).

’We didn’t set out to nail tuberculosis diagnosis,’ explains Davis, ’we wanted to unpick the biological basis of TB and its enzymes.’ But in doing this, Barry and Davis have created a diagnostic tool that could be used quickly and easily.

On the surface of the tuberculosis bacterium are three enzymes (Ag85A, Ag85B and Ag85C) that are essential for the bacteria’s survival. The enzymes were originally highlighted as potential drug targets, ’but it took us quite a while to realise the potential of using them as a mechanism to hijack the cell’s enzymatic machinery,’ explains Barry.

The Ag85 enzymes take a sugar called trehalose and incorporate it into the cell wall of the bacteria. Davis made a library of modified trehalose molecules to try and inhibit the Ag85 enzymes, but found that the enzymes still processed the modified sugars. When Davis made a fluorescent version of the sugar, by incorporating fluorescein, it was also modified and inserted into the cell wall, making the bacteria fluorescent. 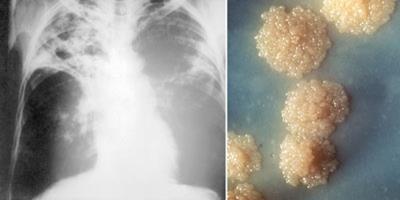 ’The fact that even the FITC modified [fluorescein modified] trehalose gets into the cell wall is really cool’ says Nikki Pohl, who works on the sugars used in the walls of cells. Pohl explains that trehalose is actually quite common, but it is not found in mammals and therefore the trehalose shouldn’t be metabolised by anything other than TB.

Trehalose is what’s known as a non-reducing sugar - a dimer joined by the reducing ends of the two sugar monomers. Pohl suggests this is another benefit of using trehalose: ’One of the problems with eating lots of sugar, as any diabetic will tell you, is that you start getting non-specific glycation products [excess sugar binding to other species]. One of the neat things about picking trehalose is that you don’t have to worry about feeding the bacteria too much sugar and non-specifically labelling things.’

The World Health Organisation estimates that over a third of the world’s population is infected with tuberculosis, but only 5-10 per cent of infected people ever become sick. The rest are just carriers of the disease and can infect others.

In the developing world, where most tuberculosis exists, current diagnosis is performed using what’s known as acid-fast staining, which Barry describes as a ’pretty insensitive test, not based on live bacteria’. Barry therefore believes the new technique has diagnostic potential. ’In fact we’re trying to do that now in a clinical research station we run in South Korea,’ Barry says ’I’m trying it on patient based samples.’

In the future, Davis believes trehalose could form the basis of a whole body imaging agent.