USscientists have performed the equivalent of the school-lab experiment of dragging a mass across different surfaces to measure frictional forces - but at the atomic scale.

Using the ultrafine tip of an atomic-force microscope as the ’mass’ the researchers have shown that at the nanoscale the vibration of atoms on a surface is a key source of friction. The results could lead to new ways of manipulating the surfaces of sub-microscopic devices.

Robert Carpick, now at the University of Pennsylvania, and colleagues used chemical vapour deposition to coat single crystals of diamond with either hydrogen or its heavier cousin deuterium. They then drew the ultrafine tip of an atomic force microscope across each surface in turn, measuring the mechanical resistance encountered by the tip. The hydrogen-coated surface was found to exhibit around 30 per cent greater friction than the deuterium-coated counterpart. The explanation is that heavier deuterium atoms vibrate at a lower frequency than hydrogen. 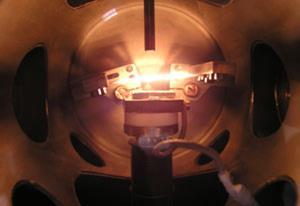 ’The microscope tip can be thought of as a ship crossing an ocean,’ Carpick told Chemistry World. ’Because hydrogen vibrates at a significantly higher frequency than deuterium, it is as if the sea is rougher. There are many more collisions between the tip and hydrogen atoms than with deuterium. This results in greater dissipation of kinetic energy from the tip, transferring the energy away from the tip which is trying to move forward.’

To demonstrate that the effect is not confined to diamond, the team repeated the experiment using a silicon surface and obtained the same result.

’This helps us understand friction one step better than we could before,’ Carpick said. ’It also shows us that one day way we might be able to manipulate friction at these scales is to tailor the vibrational properties of the atoms and molecules at the surface of materials.’

Commenting on the work, Vasileios Koutsos, who researches nanofriction at the University of Edinburgh in the UK, said, ’By using and comparing surfaces of two isotopes, one can be certain that the differences in friction come from the difference in mass and not from chemical causes. This is a significant breakthrough and many more studies in this direction are to be expected.’

Scott Perry, an expert in atom-scale friction at the University of Florida, US, told Chemistry World that friction has been difficult to study because the surface where it takes place is buried. ’Carpick and his team have clearly documented the influence of surface vibrational frequencies on the energy dissipation process,’ said Perry. ’The findings of this study will undoubtedly serve to further shape the emerging understanding of this common yet complex phenomena.’