Chemists in the US have made a quintuply-bonded dichromium complex with the shortest metal-metal bond ever isolated. The stable, crystalline structure, which incorporates a 1.803? long chromium-chromium bond, was made by Clark Landis, University of Wisconsin-Madison, and Klaus Theopold from the University of Delaware.1

The previous shortest metal-metal bond, also a dichromium linkage, was in a structure made by Al Cotton in 1978.2 The new bond pips Cotton’s complex to the ’shortest’ title by just 0.025?.

’This isn’t a huge leap, but there’s a limit to how close you can get two atoms together - there comes a point when the Morse curve [which plots change in energy as two nuclei are brought together] gets very steep,’ Theopold told Chemistry World.

In fact, the bond is formally the shortest ever made, according to the ’formal shortness ratio’ (FSR), a mathematical treatment that takes into account the different atomic radii of different atoms. 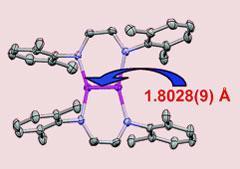 The shortest metal-metal bond yet found

The complex incorporates a dichromium core flanked by two imine ligands, each bridging the chromium-chromium bond and possibly helping squeeze the two metal nuclei together. The team discovered the compound by accident while trying to uncover the active oxidation state of chromium polymerisation catalysts. ’We recognised it was interesting, so we figured out a rational way to make it,’ said Theopold.

’I think the most interesting thing about this complex is the high bond order - formally this is a quintuple bond,’ Philip Power, University of California Davis, US, told Chemistry World. In 2005, Power published the first bond to share five electron pairs in five bonding molecular orbitals - also between two chromium atoms.3 ’As far as I know, this is only the second structure with a bond order above four,’ said Power.

Power added that he has a paper about a bond almost as short as Landis and Theopold’s in press. However, Theopold isn’t finished just yet. ’We have some ideas for what we might try to make the bond even shorter,’ said Theopold. ’We want to get below 1.8? - not for any specific purpose, but it’s just fun to try, right?’