US scientists have devised a method of generating 3D structures from flat surfaces by printing patterns onto a polymeric children’s toy and letting an IR heat lamp do the rest.

Polymers that are responsive to an applied stimulus have attracted interest in a variety of areas, and polymers that self-fold have potential applications in packaging, mechanical actuation, sensors and drug delivery.

Shape memory polymers, which return to a pre-programmed form upon a threshold temperature or other stimulus, suffer from limited movement and require complex syntheses, as the parts of the polymer that respond to the synthesis must be chemically different to the panels that move. This new technique, however, uses conventional black printer ink to print a hinge onto a cheap and readily available pre-stressed polystyrene polymer. 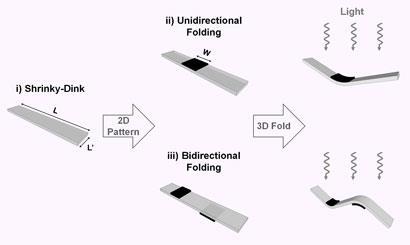 Michael Dickey and co-workers at North Carolina State University have found that the key to folding is the localised light absorption by the hinges, which heats the polymer directly below and induces polymer relaxation upon its transition temperature. Dickey explains that although they ’have been able to do this kind of thing before, the desired shape needs to be pre-programmed. With this technique, you can produce all these different structures from one sheet’. The group had tried various methods without much success, such as microwave and resistive heating - the kind used in a kitchen toaster - before unintentionally finding that black ink and an unfocused IR lamp produced the desired result.

Patrick Mather, a functional polymer expert from Syracuse University in New York, US, says that the technique ’shows that many opportunities remain for innovations in the field of shape memory polymers beyond the development of new compositions’.

Dickey and his team indicate that there is still much to be investigated. One issue is the irreversibility of the folding mechanism. Heating the folded polymer again above the glass transition temperature resulted in an opaque and shrunken unfolded form, preventing multiple uses. Additionally, the team are researching further into functionalising the polymers, among other things, with more complex geometries and temperature gradients.