Mesoporous silica has been coaxed into dodecagonal quasicrystal structures by scientists at Stockholm University, Sweden. What’s more, the quasicrystals produced were much larger than those currently made from hard substances, opening up the possibility of these interesting structures being of some practical use. 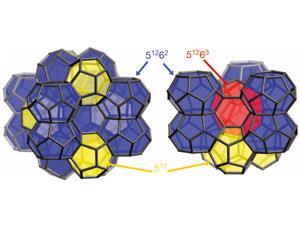 The original quasicrystal that gave birth to the field, and a Nobel prize, was incredibly small. In fact, all quasicrystals made from metals are found as tiny, nanoscale grains a few ångströms in size. Meanwhile, the newer field of soft quasicrystals, arranging liquid crystals and colloidal systems into quasiperiodic arrangements, can get up to hundreds of ångströms, to the mesoscale between the nanoworld and the one that we inhabit. The choice, until now, has been hard and small, or soft and larger.

Osamu Terasaki’s group, however, have managed to induce silicon dioxide to aggregate into different crystal structures by varying the pH of the system and one of those structures produced shows dodecagonal, or twelve-fold, symmetry. The crystals are also much larger in size than previous hard systems, much more like soft matter quasicrystals. Last year, physical chemist Paul Steinhardt told Chemistry World that he thought that the applications of these interesting materials would emerge once their synthesis can be controlled. Perhaps, suggests Terasaki in the paper, this work could be a guide.