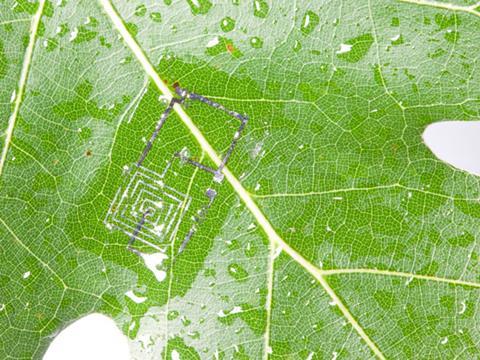 Transistors in the transient circuits contain less than 1 Âµg silicon, which can be dissolved in as little as 30 Âµl of fluid

A US-led team has made the first completely water-soluble silicon-based circuits and demonstrated simple medical implant devices that wouldn’t need later removal. By transfer printing silicon and magnesium-based elements onto a silk support, they produced various ‘transient’ components and two example circuits. ‘One was a simple but functional transient 64-pixel digital camera that we demonstrated could take pictures,’ John Rogers from the University of Illinois, Urbana-Champaign, tells Chemistry World. ‘The other was a wireless-powered thermal therapy device to mitigate bacterial infections at surgical sites. We demonstrated that you can eliminate bacteria with heating in a petri dish, then demonstrated resorbability in an animal.’

Rogers’ team studies the chemical and physical processes involved in transfer printing electronic materials, and uses them to make unusual devices. They have joined with Fiorenzo Omenetto and David Kaplan at Tufts University in Medford, Massachusetts, who develop biocompatible silk structures that can be easily degradable or long-lasting. In 2009, the groups produced silicon devices where the silk support dissolved, but the silicon didn’t. That robustness is characteristic of silicon and hampers medical use, explains Zhenan Bao from Stanford University, who was not involved in this work. ‘For implantable devices we would like the devices to disintegrate after usage,’ she says.

The key issue was the thickness of the silicon layer, which in 2009 was 260 nm, Rogers explains. ‘Nanoporous silicon has been explored as a drug delivery vehicle that degrades in biofluids,’ he says. ‘In that case the porosity facilitates the dissolution. Instead of making the silicon porous, we make it incredibly thin. If dissolution rates in the body are about a nanometre a day, a 20 nm thick sheet of silicon is gone in three weeks. So that’s what we made.’

Bao previously made polymers for biodegradable organic transistors, but notes that silicon has a big advantage. ‘The complexity of device integration is much more advanced with silicon technology due to its long history of development,’ she says. ‘This work is really significant and opens new possibilities for silicon implantable medical device applications.’

Rogers and his colleagues are further developing these devices, but he also wants to see how easily they could be produced by the semiconductor industry. ‘We’re working with a foundry that currently makes conventional integrated circuits to figure out replacements and substitutions so that the same foundry spits transient electronics out the back end,’ he says. ‘It looks like that could be feasible.’