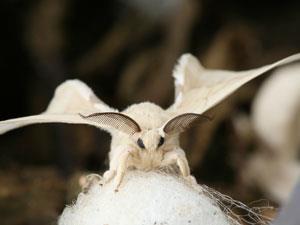 Storing delicate vaccines and antibiotics in freeze-dried silk could eliminate the need for refrigerated storage, reducing transport costs and waste, say US researchers. The biggest advantage could be in developing countries, which lack the finances and infrastructure to maintain a ‘cold chain’ when distributing medicines, but are often the places where they are most needed.

Many vaccines and some small molecule drugs degrade very rapidly if they are not refrigerated, says David Kaplan from Tufts University in Massachusetts, whose team has been developing this idea. In fact, keeping them cold can account for up to 80% of the cost of some vaccinations. Techniques such as freeze-drying and coating particles of the medicines with various sugars helps, but often these are still very sensitive to moisture and still require refrigeration.

Kaplan's process to formulate drugs with silk is incredibly simple. After preparing a solution of silk protein in water, the medicines are added and the mixture is freeze-dried to create a stable preservative matrix. Kaplan explains that the silk protein is generally quite hydrophobic and forms strong stabilising interactions with molecules embedded in it. ‘Coupled with the ability to process silk just in water at ambient conditions means you can put sensitive molecules in there and not lose their function,’ he adds. Silk is also widely available from the textile trade and can be formed into self-standing devices for drug delivery like patches or dressings. However, Kaplan notes that the silk would require extensive purification before it could be used medically.

However, silk’s ability to stabilise fragile molecules is relatively well known, as spider-silk expert Thomas Scheibel, from the University of Bayreuth in Germany, points out. ‘These stabilising effects are well described and could be expected,’ he says. But he adds that showing the effect extends to antibiotics and vaccines for widespread infectious diseases will have an impact on applications in the pharmaceutical industry.

Kaplan counters that stabilising intact virus particles is more challenging than simpler proteins, because of their larger size and complexity. Quantifying how robust the stabilisation interaction is, and how long it persists at higher temperatures, is also really important when it comes to thinking about vaccine distribution, he adds.

The group prepared films of silk containing the combined measles, mumps and rubella (MMR) vaccine and showed that it can be stored for six months at 45°C and retain more than 85% of its activity, compared to powdered forms that degraded in a few weeks.
Silk films impregnated with the antibiotic tetracycline also lasted longer than solutions, but an unexpected result was that the silk also seemed to stabilise the antibiotic against degradation by light. ‘Tetracycline is inherently light-sensitive,’ says Kaplan, ‘and we noticed that the films weren’t changing colour at the same rate as the solutions [when they were stored in the light].’ He explains that the stabilisation mechanism is unclear – the silk is transparent, so it’s not just that it’s physically blocking the light out. ‘We assume it’s the same reason we see the other stabilisation effects,’ he says, ‘but we need to probe that further.’