US researchers aiming to emulate the functionality of a cat’s brain have developed an easily-fabricated, robust nanoscale device that imitates the connectivity between neurons in the brain.

The two-terminal electronic device, known as a memristor (’memory’ + ’resistor’), is similar to a biological synapse in that its conductance can be precisely changed by controlling the charge running through it. The researchers found that changing the way they embedded silver ions in the silicon-based devices improved their performance.

A memristor’s resistance is controlled by its ’memory’ of the currents and voltages it has been exposed to. ’It can be employed to build a computer in the way that nature builds brains,’ explained Wei Lu of the University of Michigan, Ann Arbor.

The first memristor was made in 2008 from titanium dioxide, which is difficult to integrate with traditional silicon computer chips. Silicon-based devices have since followed, although the resistance change is abrupt. Now Lu’s team has produced silicon memristors that work more smoothly. ’The new design emulates biological systems better because the change is more gradual and can be more precisely controlled,’ he says.

In the memristor, current flow is associated with ion motion, changing its resistance as they move. Previous memristors introduced silver ions to perform this function into the silicon from an electrode deposited on top. However, this process carves localised conduction channels responsible for the abrupt changes. 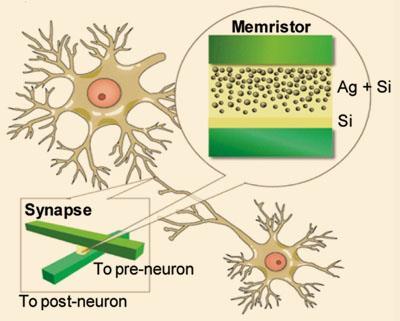 How memristors can act as synapses between neurons, with schematics of the memristor structure and the two-terminal device in the insets.

Instead, Lu’s students Sung-Hyun Jo and Ting Chang introduced silicon and silver simultaneously via co-sputtering. Using an argon plasma, they ejected atoms from pure elemental targets into a vacuum chamber containing the partially-fabricated memristors. The atoms deposit onto the device in a 20-30nm thick film, allowing easy control over the ratio between the two components. ’The device can endure at least 150 million write and erase cycles,’ Lu told Chemistry World. ’When you write and erase other systems a few thousand times, performance typically starts to degrade.’

Memristors can simulate synapses because electrical synaptic connections between two neurons can seemingly strengthen or weaken depending on when the neurons fire. Lu and colleagues demonstrated that their memristor performs an equivalent function with a conventional silicon-based circuit acting as neurons, raising and lowering the memristor’s resistance. The team is part of a US Defense Advanced Research Projects Agency programme that aims to create computers that mimic biological neural systems. ’These will be the components we will use to make the hardware version of a cat brain,’ Lu said.

Nadine Gergel-Hackett, who researches memristor technology at the US National Institute of Standards and Technology, acknowledges the Michigan team’s successful creation of a brain synapse analogue. ’This work is a large step towards the realisation of biology-inspired computing,’ she says.