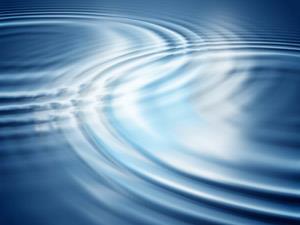 Chemical reactions are often regarded as rearrangements in the bonding patterns of billiard-ball-like atoms. But by studying one of the simplest reactions conceivable, a team from Spain and the USA has found that the quantum nature of the atoms can affect the outcome in a profound way. They report that different reaction pathways can interfere with one another like quantum particles in the famous double-slit experiment, producing a series of sharp peaks in the distribution of reaction products exiting from the molecular collisions at different angles.1

Quantum theory is needed to describe the wave motions of electrons involved in chemical bonding. However, ‘as chemists we would like to treat nuclei as classical particles,’ says Richard Zare of Stanford University, one of the authors of the new study. ‘By and large, this is the language of chemistry in discussing various reactive and nonreactive molecular rearrangements.’ Of course, quantum theory is needed to explain the quantization of vibrational and rotational state of molecules, but ‘we like to regard the motion of unbound nuclei as classical’, Zare says.

This requires ‘quasiclassical trajectory’ (QCT) calculations, in which the motions of atoms and molecules are treated as classical when they come together to react, and only subsequently are the molecular products quantized. But exceptions are known already – for example, when hydrogen atoms undergo quantum tunneling in moving from one location to another.

Working with Javier Aoiz and colleagues at the Complutense University of Madrid in Spain, Zare and colleagues have now shown that the reaction of a hydrogen atom with a deuterium (D2) molecule, in which the H replaces a D, is another exception that defies a QCT approximation. Because of its simplicity, this is a ‘benchmark’ reaction for studying reaction dynamics, and can be followed using full quantum mechanical calculations.

The researchers mix D2 with HBr in a vacuum chamber, cooling the reactants by supersonic expansion so that the D2 molecules are nearly all in a single vibrational and rotational quantum state. They initiate the reaction with a laser pulse that splits the H-Br bond, and then study the HD molecules produced at different angles. Using a laser, the team can selectively ionize particular vibrational and rotational states of HD and analyse them with mass spectrometry, building up a detailed picture of the ‘reactive scattering’ in the H + D2 reaction.

They find that the angular variation in the amounts of HD with particular quantum states shows pronounced oscillations for the backwards-scattered direction: a series of sharp peaks and dips, which QCT calculations can’t reproduce. This, the researchers say, is because there are several trajectories of the reactants that lead to the same product state. These different mechanisms can therefore interfere with one another, just as different trajectories of a quantum particle passing through a double slit may interfere to generate a series of peaks in the particle’s distribution on the far side. These various mechanisms are also present in the QCT calculations, but they are just superimposed without interference. Only when the team carried out detailed quantum calculations could they reproduce the reactive scattering angular distributions.

‘This is a wonderful piece of chemical dynamics, showing that there is still more to learn from this simplest of all chemical reactions,’ says Rex Skodje of the University of Colorado at Boulder, US. Skodje and coworkers have seen interference effects previously between different reaction pathways in the H + D2 reaction2, but he says the present work succeeds in teasing out precisely how such effects arise from specific quantum states of the reactants. ‘It is the state-of-the-art comparison of theory to experiment that makes this work stand out,’he adds.

Zare says the results show that ‘simple intuitive concepts will not suffice in general to understand this type of reaction dynamics’. He believes that such effects ‘will occur for many other heavy-particle scattering systems, not just those containing hydrogen atoms’. But in general, says Skodje, these will be smeared out by the averaging effects of thermal motions, making interference hard to see.