Researchers encourage single molecule magnets to bind to a gold surface in a certain orientation, retaining the magnet's properties

Italian researchers claim that they’ve bound a single molecule magnet (SMM) to a gold surface, whilst retaining the magnet’s properties. The results could help in the development of molecular scale ’spintronics’ - electronic devices based on electron spin.

SMMs are metal-organic clusters that display purely individual magnetic properties, with each molecule able to be individually magnetised. This has led to a lot of interest in using SMMs for data storage, and potentially quantum computing, but the magnetisation of the individual molecules is dictated by its orientation - something that has been difficult to control.

Now, Roberta Sessoli from the University of Florence, Italy and colleagues have found a way to encourage SMMs to adopt a preferential orientation in a monolayer on a gold surface.

Sessoli’s SMM contains a disc-like cluster of four iron atoms arranged like a propeller, with one central iron atom surrounded by the other three. These three arms of the propeller are bonded to stocky ligands while the central atom has two longer organic arms attached. One of these long arms binds to the gold surface, and the steric interactions from the stockier ligands orientate the molecule axis, and hence the magnetisation axis, of the molecule. 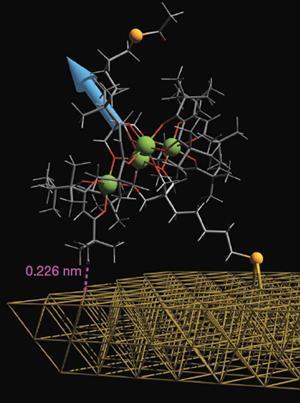 Sessoli’s team has shown that these SMMs have ’magnetic memory’ - a key feature for data storage applications - by changing the magnetic field around the molecules and showing how the molecules become magnetised. The key step in the process is that the cluster shows quantum tunnelling effects, as particles tunnel from one spin state to another, which has potential in data storage applications making use of the discrete levels of magnetisation.

Sessoli admits this is very much a proof of principle work: ’What we’re now hoping is for people to come forward and collaborate with us on the next step.’

Wolfgang Wernsdorfer, who works on molecular spintronics at the N?el Institute in Grenoble, France, agrees that the results are very promising, and hopes that they will motivate further studies. In particular, he is impressed that Sessoli’s work appears to have overcome the problem of SMMs losing their magnetic properties when coupled to metal surfaces. Wernsdorfer hopes that theorists will now look at the influence of metal surfaces on nanomagnets. ’The important question is whether the memory effect on a metal surface is true,’ he says.

Ultimately, Wernsdorfer agrees that this is an important research area, both for spintronics and to test other ideas using quantum physics. ’I am convinced that "quantum functions" will be important in future devices,’ he says, and he sees SMMs as the ideal test molecules for that investigation.