Researchers have cracked a long-standing problem in polymer processing by developing a mathematical model that can predict the flow properties of molten polymers that contain complex mixtures of branched molecules of different sizes and shapes. The work could open the way to developing a sophisticated ’recipe book’ for polymer scientists, allowing them to tailor the synthesis of polymers to build in desired properties for processing.

The research team, led by Daniel Read of the University of Leeds in the UK, focused on low density polyethylene (LDPE), which can be stretched and pulled to make a wide variety of products. The polymer contains a huge mixture of branched molecules which differ widely in their topology and size and which become highly entangled. Given such a complex molecular environment, predicting the flow properties of the polymer melt has so far proved too difficult. 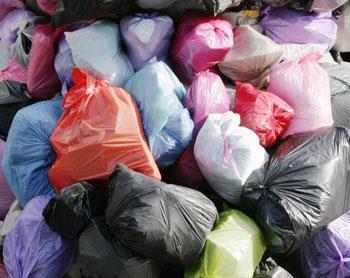 To predict polymer flow, two key pieces of information are needed. The first is the distribution of the various sizes, shapes and branch patterns of the molecules in the system. An algorithm had previously been developed that can predict this based on the synthetic procedure used to make the LDPE. The second is how the molecules act when subjected to an external force, individually and when entangled with their neighbours.

The molecules behave as tiny springs; when they are wound up their tendency is to revert to a relaxed state through Brownian motion. This gives the mixture its viscoelastic properties and is central to the rheology of the melt. ’The computer code takes a representative set of around a thousand different topologies across the range of sizes,’ says Read. ’Using an integrated set of mathematical equations we obtain a distribution of the relaxation times and how far the molecules can be stretched.’

Working with industrial polymer chemists from Dow Benelux and LyondellBassell, the team showed that the viscoelastic properties of the melt of a given type of LDPE could be predicted with unprecedented accuracy.

’We made two theoretical breakthroughs,’ says coauthor Tom McLeish, from the University of Durham, UK. ’One that allowed us to calculate the disentanglement times of deep segments in complex trees, then another that allowed us to work out how the polymer stretch was being transmitted through the molecules.’

Polymer dynamics expert Sachin Shanbhag of Florida State University, US, says that most work in the field has been carried out on model ’clean’ polymers which behave relatively predictably. ’However, the goal - or more honestly hope - has always been that we would be able to extrapolate the lessons learned from these designer polymers to "dirty" commercially important polymers,’ he adds. ’This paper demonstrates that achieving that goal is now a question of "How far can we go?" rather than "Will we ever get there?".’