Candle soot has been utilised in a budget approach to self-cleaning surfaces that are both water and oil repellent.

Doris Vollmer and her colleagues, at the Max Planck Institute for Polymer Research in Mainz, Germany, were working on water repellent surfaces, but, as she explains, for many applications just repelling water is not sufficient. ’I wear glasses and they are always dirty because of the oil from my fingers,’ she says, ’so I wanted to go further and find something that is oil repellent.’

Last Christmas during a literature search, Vollmer was inspired by the discovery that soot is known to be hydrophobic. This led her to coat glass slides in soot, by holding them over the flames of her Christmas candles.

Soot is not very stable however, so the slides were then coated with a silica shell using chemical vapour deposition. Finally the slides were calcined, turning the black coating transparent. 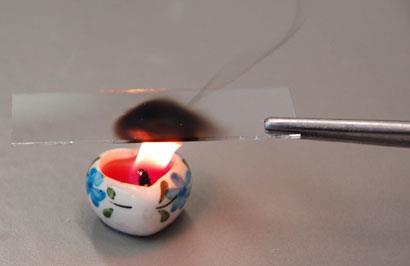 Tests found that the new coating repels both oil and water (a property known as omniphobicity), even after being eroded by sand.

’It is difficult to say whether this particular work will yield practical applications, but in principle there are many areas where such non-sticky self-cleaning surfaces are needed,’ says Michael Nosonovsky, who works at the University of Wisconsin-Milwaukee in the US on omniphobic surfaces. Examples include optical devices and the windows of skyscrapers.

But Vollmer doesn’t expect a conveyer belt full of candles to be used to make self-cleaning surfaces any time soon. Instead, she says, she thinks the method is a useful way to investigate how to make omniphobic surfaces. ’Now we’re trying to improve it further and get particles that are larger, with better mechanical stability,’ she adds ’but still keeping the idea the particles are spherical.’

The simplicity of the approach is what particularly appeals to Steven Bell, who works on hydrophobic surfaces at Queen’s University, Belfast, UK. ’The rate of advance in the field has been remarkable,’ he says ’although this particular example is a very neat and straightforward.

’The fact that non-specialists can make materials of this type and then investigate their properties is clearly something that’s going to [further] advance the area,’ Bell concludes.