Space ice goes against the grain

Space ice made from a mixture of methanol and water expands under pressure, and shrinks when heated - the opposite behaviour to most solids.

Dominic Fortes at University College London, UK, is interested in the internal structures of icy moons like Saturn’s Enceladus, which is thought to have an underground sea of water. But when measuring the properties of an ice-methanol system his findings were ’entirely unexpected’ - the ice expanded with increasing pressure and shrank with heating.

The oceans of icy satellites are likely habitats for extraterrestrial life. But to understand the chemistry and behaviour of these habitats, the ice has to be studied at different temperatures and pressures. 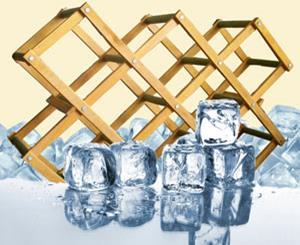 The ice’s crystal structure acts like a collapsible wine rack - when compressed it expands outwards in one direction.

Fortes decided to study the icy compound methanol monohydrate (a 1:1 methanol and water mixture) because scientists infer that the ice on moons will also have methanol present. This is because interstellar ice and comets, the leftovers of planet formation, contain small molecules like methanol.

After determining the crystal structure of his material, Fortes studied its properties as a function of temperature and pressure. ’Having measured the thermal expansion first, I then suspected that one direction in the crystal would be incredibly squashy, but I thought that this would result in a phase transition to another polymorph [a different crystal arrangement of the molecules] at relatively low pressures,’ says Fortes. ’I did not predict the negative linear compressability.’

Fortes suggests that this negative linear compressability (NLT), the phenomenon of expansion under mechanical pressure, is because the methanol monohydrate crystal lattice is ordered like a collapsible wine rack - if you push down on the hinged points the lattice pushes outwards.

This isn’t the first substance that displays both NLT and negative thermal expansion (NTE) says Arnaud Marmier of the University of Exeter, UK, who studies these properties and describes them as ’weird, and quite fascinating’. Marmier doesn’t expect the ice to be used in materials applications itself because it’s too soft, but Fortes says he would be ’delighted if material scientists took up this material for further investigation’.

For Fortes though, ’the nitty-gritty of NLC and NTE are a bit of side-show from the planetary work’, which he now plans to continue with more high pressure studies of his interstellar ices. ’I’m not going to predict what I might find,’ he concludes, ’nature always makes up its own mind.’