Scientists have uncovered a biochemical pathway that enables a remarkable marine alga to rapidly heal itself after it has been wounded. The work could provide clues about how to make new synthetic adhesives that work under water.

Dasycladus vermicularis is a green alga found in warm tropical waters. Intriguingly, it is unicellular - the entire organism, which can be more than 2cm long, is a single cell. This makes it especially vulnerable to external damage, with the danger that much of its contents would leak out. To avoid this, the organism has evolved a way of rapidly plugging any breach with a tough biopolymer consisting of cross-linked protein and carbohydrate molecules. Within seconds of any damage the wound starts sealing, and within minutes it is completely healed.

To understand the biochemical basis of this speedy response, Matthew Welling and Georg Pohnert of Friedrich Schiller University Jena in Germany, and Cliff Ross of the University of North Florida in the US, made a detailed analysis of the metabolites present in both intact and damaged D. vermicularis cells. 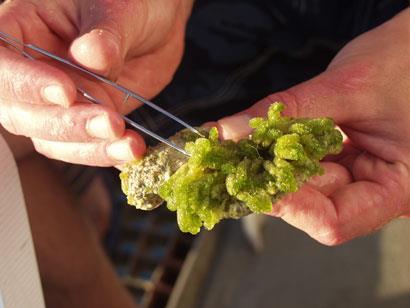 Each alga can be more than 2cm long

In intact cells, the team found the compound 6,7-dihydroxycoumarin-3-sulfate, a stable hydroxylated and sulfated derivative of the benzopyrone coumarin. Hydroxycoumarins are known to participate in cross-linking reactions in biological systems. After damaging the cell, hydrogen peroxide was detected, in addition to the much less stable 3,6,7-trihydroxycoumarin - which had not been present before the damage.

The team concluded that, upon damage of the cell, sulfatase enzymes are released, and these cleave the sulfate group from the sulfated hydroxycoumarin. This yields 3,6,7-trihydroxycoumarin. This is then oxidised by an oxidase enzyme, with hydrogen peroxide as the substrate. The oxidation of the trihydroxycoumarin produces an oxygen radical on the molecule which then reacts with proteins or carbohydrate molecules in the vicinity. ’Cross-linking can occur when an amino-bearing or sulphydryl-bearing moiety binds to the coumarin at one site. Another amino or sulphydryl group can bind in at another site. Now you have created a link in the chain connecting two proteins or carbohydrates,’ says Ross.

’This is the first study to provide evidence for coumarin-based polymer formation in an underwater setting,’ Ross adds. ’Perhaps this study can stimulate the thought process into the development of novel underwater adhesives.’

Herbert Waite, who researches natural marine adhesives at the University of California Santa Barbara, says, ’The alga Dasycladus relies on the strong electron withdrawing effects of a sulfate group to keep the trihydroxycoumarin from oxidising prematurely. It’s an ingenious triggered control strategy.’