UK researchers have developed a new type of polymer scaffold support for growing cultured human skin cells. The team, based at the University of Sheffield, showed that the mechanical and geometric properties of the scaffold are far more important than any specific chemical property, and that cells will happily grow and multiply on a relatively inert matrix provided it is of the correct form. 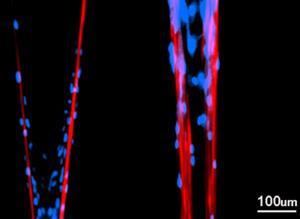 ’It turns out that skin cells are smart, so the scaffold can be dumb,’ Tony Ryan, who led the research, told Chemistry World. The finding opens the way to the development of new methods of culturing skin cells for treating wounds.

Ryan’s team, including synthetic chemist Chris Hunter and tissue engineer Sheila MacNeil, initially attempted to incorporate specific signalling molecules within a block copolymer matrix to coax cells to adhere to the scaffold. ’When we tried to grow the cells, they didn’t want to know,’ Ryan said. The team then took a second approach, dissolving polymers - they used polystyrene and polylactide - in solvent, then electrospinning extremely fine fibres of submicron diameter. These fibres were captured and formed into a mesh that resembles tissue paper.

Cultured skin cells were introduced to the mesh and they grew efficiently, without the need for exotic adhesion-signalling molecules to be present. Certain sizes of fibre have been found to be optimal, and results of this work on fibre dimensions are due to be published shortly in the journal Tissue Engineering.

Kevin Shakesheff, an expert on tissue scaffolds at the University of Nottingham, UK, told Chemistry World, ’Ryan’s approach will be applicable to many other tissue and cell types and MacNeil’s experience of successfully introducing tissue engineering into the clinic will be invaluable.’