A new technique to disperse palladium atoms in catalysts has been developed by researchers in China.1 This not only does this maximise the availability of the individual noble metal atoms in the catalyst, but it also allows them to catalyse completely different pathways from traditional noble metal catalysts, drastically increasing the catalyst’s activity for some reactions. The researchers are working to extend the technique to other noble metal catalysts. 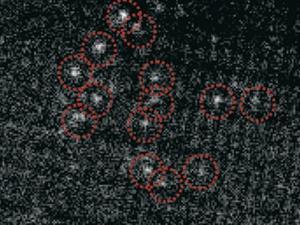 Precious metals such as platinum and palladium catalyse numerous reactions in industry, such as the oxidation of unburned hydrocarbons in car’s catalytic converters. Dispersing the noble metal atoms maximises the catalysts’ efficiency per atom. Several techniques devised to achieve this only work when the noble metals are at very low concentrations. Many catalysts require calcination (heating in air), which can cause individual noble metal atoms to clump into nanoparticles.

Materials chemist Nanfeng Zheng of Xiamen University in China and colleagues have developed catalysts of atomically-dispersed palladium on titanium dioxide nanosheets produced by reacting TiCl4 with ethylene glycol. They dispersed the nanosheets in water and added H2PdCl4, before irradiating the mixture with UV light and collecting, washing and drying the resulting catalyst. The UV photons generated ethylene glycolate radicals, which displaced the chloride ions, causing the palladium atoms to form stable palladium–oxygen bonds to the nanosheets. The catalyst did not need calcination.

The researchers tested the catalyst by hydrogenating styrene. The activity per palladium atom was nine times higher than in some commercial palladium catalysts and remained undiminished after 20 cycles. ‘Each palladium catalysed 200,000 bond hydrogenations and we didn’t see any decay,’ Zheng says. More remarkably, the catalyst was over 55 times more active than other palladium-based catalysts for hydrogenating the C–O double bond in benzaldehyde because it activated hydrogen through a different pathway that is normally only accessible with homogeneous catalysts.

The researchers are now investigating whether the technique can improve the efficiency of other industrially important catalysts. ‘I think it could be pretty general,’ says Zheng. ’A lot of noble metal catalysts are made from chloride precursors: our method allows us to remove those chloride anions easily, and then the metal will disperse on the support nicely.’

Chemical engineer Maria Flytzani-Stephanopoulos of Tufts University in the US describes the work as ’a second generation approach to making atomically-dispersed metals on oxides’. It is relatively easy, she says, to add 0.1–0.2% metal to an oxide as it becomes pinned by lattice defects. ’[The researchers] approach, which follows on our publication showing gold on titania,2 achieves more than one weight percent of such active sites,’ she says. ‘That’s the main accomplishment, because then you have a much more active catalyst. It’s exciting to see the extension of this approach to other metals and reaction systems.’