Step towards a spider venom vaccine 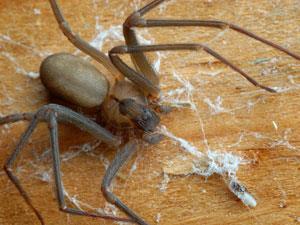 Brazilian researchers have engineered a protein that should make producing antivenoms to treat spider bites both cheaper and simpler. The protein may also pave the way for a vaccine, as it can prime the immune system to cancel out the worst effects of the spider venom.

Venomous spiders inflict pain, injury and even death in several parts of the world. Those bitten often need to be treated with an antivenom, a serum containing specific animal antibodies against the venom toxins. Antivenoms are currently produced by injecting the venom into an animal to provoke an immune response. But a single spider only produces a tiny amount of venom, so extracting enough to produce antivenoms on an industrial scale is a tricky business.

‘In Brazil, more than 40,000 spiders per year are used to make antivenoms,’ says lead author Carlos Chavez-Olortegui of the Federal University of Minas Gerais, Brazil, ‘and the injection of these extremely toxic substances harms the animals involved.’

His group have been working on reaper spiders (Loxosceles sp.), which bite thousands of people every year in Brazil. They constructed a vaccine-like protein that allows them to make antivenom without having to extract venom from spiders and inject it into animals. The protein is non-toxic, but has a distinctive structure that is recognised by the immune system. To make it, the team had to isolate three antigen peptides from a Loxosceles venom toxin called LiD1. They then used molecular cloning to construct a single protein containing all three components.

Rabbits injected with the protein produced antibodies against LiD1, and those that had been immunised were protected from spider venom. Chavez-Olortegui says the protein could make antivenom production easier and safer, and is a promising candidate for a vaccine that could be used to protect people against bites. ‘Using this non-toxic protein is clearly a good option,’ he says, ‘and the same approach could be taken with other venomous species.’

Ken Winkel, director of the Australian Venom Research Unit in Melbourne, says that whether the work translates into new antivenoms will depend on cost effectiveness. ‘This is certainly an interesting approach,’ he notes. ‘As technology improves it may be that this strategy becomes more generalised in antivenom development. But it has limited applications at this stage, due to the lack of knowledge about the antigens of different venoms.’