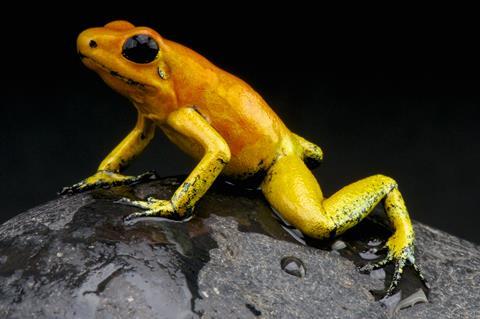 US researchers have synthesised a deadly toxin produced by poison dart frogs and made the toxin’s non-natural mirror image too. The new synthesis could provide a much needed source of batrachotoxin (BTX) and its new variant to study certain diseases of sodium ion channels.

BTX is a steroidal alkaloid and one of the most potent known natural toxins – it takes just 0.1mg to kill an average adult human. It works by irreversibly binding to pore-forming membrane proteins which function as voltage-gated sodium channels that help to conduct nerve impulses. BTX permanently opens sodium channels and prevents transmission of nerve signals leading to paralysis and heart failure.

Since its isolation from Colombian poison dart frogs in 1963, BTX has given scientists a way to study the role of sodium channels in many disorders including epilepsy, heart problems and pain. But with poison dart frogs now endangered and a lack of efficient synthetic routes to produce BTX, the world’s supply has dwindled to less than 170mg.

Justin Du Bois‘ lab at Stanford University in California has tackled this problem head on by creating a more efficient 24-step synthesis of BTX – half the number of steps of previous syntheses. The method involves independently making two relatively complex chemical fragments and then stitching them together to make the steroidal skeleton of BTX. ’This dramatically reduces the amount of time and number of resources needed to make BTX,’ says Matthew Logan, first author of the work, who is now at Gilead Sciences. ‘Our synthesis is really the only viable method to obtain quantities of the toxin needed for biological testing.’

What’s more, for the first time the non-natural enantiomer of BTX can be produced. Electrophysiological experiments revealed that BTX’s non-natural enantiomer had near identical potency against voltage-gated sodium channels as the natural form but with a twist. Instead of working as an agonist like the natural enantiomer, the synthetic enantiomer has an antagonistic effect, reversibly blocking sodium channels. ‘It is really remarkable that the mirror image of the same molecule binds with similar affinity to the inner pore,’ says Logan. ‘To the best of our knowledge, we are not aware of other examples where an enantiomer has similar potency but opposite activity.’

‘This is completely unexpected and will add another nice tool to our molecular toolbox to investigate sodium channel function,’ comments Frank Bosmans, who works in this field at Johns Hopkins University in Baltimore, US. ‘It seems that the [non-natural] variant binds to a region that is similar but not identical. In this respect, more work is needed to figure out what exactly is going on. There is reason to think that many improvements can still be made,’ he adds.