Researchers have developed a chemical 'glue' that binds molecules to proteins without compromising protein function.

Researchers in Finland and the UK have developed a chemical ’glue’ that binds molecules to proteins without compromising protein function. The method could be used to modify a wide range of proteins for a variety of purposes, such as in the development of new protein-based therapies. 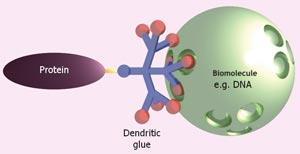 Mauri Kostiainen of Helsinki University of Technology, together with colleagues at the Technical Research Centre of Finland and the University of York, showed how a naturally occurring protein called hydrophobin, which has surfactant properties, could bind strongly to DNA molecules with the help of a tree-like dendrimer as glue.

The hydrophobin molecule was modified to accept the dendrimer by introducing a single cysteine residue into the structure by site-directed mutagenesis. This provided a functional thiol group. The nine-branched dendrimer was grafted to the protein at this thiol via a maleimide group at the dendrimer’s root.

’With the dendrimer bound to the protein we demonstrated that the protein retained its surfactant nature, and so the dendrimer’s presence did not interfere with the protein’s functionality,’ David Smith of the University of York told Chemistry World.

The tips of the dendrimer’s branches were capped with spermine residues, powerful ligands for DNA. When the protein-dendrimer conjugate was presented with DNA, the spermine bound to the DNA.

’Because of the multivalent nature of dendrimers, there is enhanced affinity for binding,’ Smith said. ’We believe that this system demonstrates that it could be possible to functionalise pretty much any protein with a dendrimer whose surface groups are selected to bind a particular target.’ Simon Hadlington