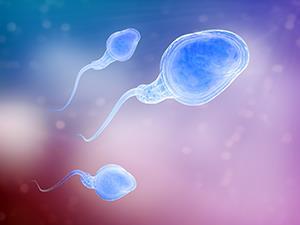 Mass differences between bovine sperm bearing X or Y chromosomes have been measured by researchers in Italy. The findings could be used to develop a gentle sperm sexing technique.

The livestock industry relies on sperm sorting to select the right candidates for artificial insemination. Flow cytometry, the current technique used to sort sperm, involves labelling sperm with a fluorescent dye and capturing the labelled sperm in single droplets before exciting the dye. The strength of the dye’s fluorescence indicates the presence of X or Y chromosomes. However, in this intrusive process the sperm become stressed – the extent of the damage this causes is still under debate.

A microbridge sensor developed by Marco Mauro and his team at Novaetech, Napoli, in collaboration with the Italian Experimental Institute, Lazarro Spallanzani in Cremona, is a non-invasive alternative for sorting live sperm cells.

The sensor, able to measure picogram masses, is a microcantilever consisting of a resonating micrometric capillary that is fixed at both ends and connected to an external fluidic system. The flow of a fluid containing suspended sperm is controlled to allow a single sperm cell to enter the capillary at any one time. As the sperm flows through a sensitive area of the capillary a variation in the forced vibration is detected. The signal is proportional to the buoyant mass of the sperm. ‘This is the first direct measurement of a single sperm’s mass,’ says Mauro. These preliminary results provide evidence of measurable differences in the mass of sperm cells bearing X or Y chromosomes.

Hai-Feng Ji, an expert in micromechanical sensors for biological applications at Drexel University in the US, supports the work. ‘Micromechanical systems may compete with flow cytometry for distinguishing X and Y chromosomes. The system holds several advantages compared to that of flow cytometry, such as fast, label free screening.’

This initial work involved weighing bovine spermatozoa pre-sorted by flow cytometry. Mauro and his team are now looking to confirm the sex-sorting potential of this microbridge sensor using a mixed sample of live cells.