Scientists in Canada and the US have shown how it is possible to assemble ordered arrays of short chains of a commercially important conducting polymer on a metal surface. The finding is significant because the molecular order of conducting polymers can have a profound effect on their electronic properties. The researchers believe that their work is an important step towards the creation of flat sheets of such molecules, a single molecule deep. This would be analogous to graphene - a two-dimensional wafer of carbon one atom thick which has a range of intriguing physical, chemical and electronic properties.

The researchers used crystalline copper as the surface for growing the polymer poly(3,4-ethylenedioxythiophene) (PEDOT), which is the most widely used conducting polymer. A precursor molecule is deposited on the copper surface which acts as both a template that dictates the direction of the growth of the polymer, and as a catalyst for promoting the polymerisation.

Using scanning tunnelling microscopy, the team showed that the monomer precursor molecules align themselves along a crystal plane of the copper in a long chain.   However, initially they remain unbonded. Several chains align themselves in parallel, where adjacent precursors then link covalently. The effect of this is to form multiple arrays of oligomers, ranging from two to 14 molecules long, lying adjacent to each other. 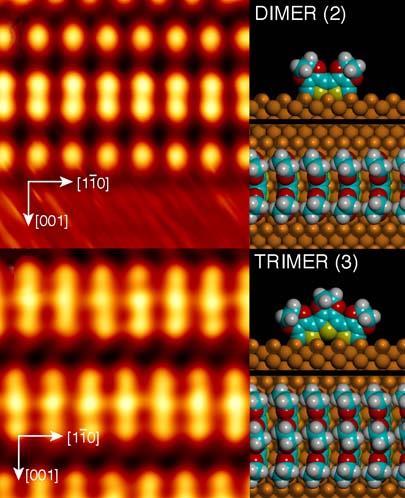 The team formed arrays of oligomers, ranging from two to 14 molecules long, lying adjacent to each other

’We have shown that we can get structural order on an important conjugated polymer,’ says team member Federico Rosei of the University of Quebec. The team is now investigating ways of lengthening the covalently bonded chains and modifying the precursor so that it can form bonds in two directions, with the aim of linking the adjacent chains to form a two-dimensional sheet, which could then be etched off the copper surface. ’Ultimately we would like to create analogues of graphene made with more sophisticated building blocks,’ Rosei says.

Colin Raston, director of the Centre for Strategic Nano-Fabrication at the University of Western Australia, says that the new work ’has implications in forming a diverse array of different aligned conjugated polymers, with high stereochemical control, as well as control over the chain length and overall 2D structures, which is not possible in conventional solution processing.’

Raston adds, ’the results have exciting possibilities in studying selectivity of cross coupling reactions, with the "laboratory" combinatorial library down to nanometre dimensions, using copper and other metals, and indeed metal alloys.’