A US high school teacher and nine of his students have made nanoparticles that can neutralise venom from one of the most dangerous snakes in Africa. These nanoparticles could offer a way to make cheaper and more practical antivenoms. 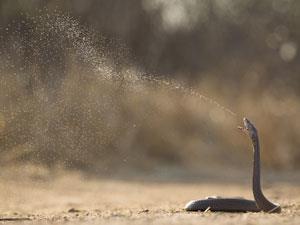 Now, Steven Sogo and his best students from Laguna Beach High School in California, have synthesised nanoparticles that will selectively bind to toxins in venom from the Mozambique Spitting Cobra. In vitro tests showed that, by binding to the toxins, the nanoparticles can prevent the toxins from causing cellular damage.

All experimental work was done by the students – a small group would work on the project for a year and then pass it onto a new group the following year. ‘The students learnt the importance of documenting their work well enough so that next year’s students could carry it forwards,’ says Sogo.

They began by designing a mixture of acrylamide monomers expected to electrostatically and hydrophobically interact with toxins in the venom. Cobra toxins added to the mixture acted as templates for polymerisation of the monomers and subsequent removal of the toxins, by dialysis, left nanoparticles with cavities complementary to the toxins.

‘I think this work is another compelling example of the possibilities offered by the molecular imprinting technique,’ says Antonio Guerreiro, a synthetic antibodies expert at the University of Cranfield, UK. ‘For years molecular recognition was largely entrusted to antibodies, but recently, synthetic analogues such as molecularly-imprinted nanoparticles have emerged as a viable and robust alternative. This technique may provide an entirely new generation of antidotes and therapeutic agents, overcoming the stability problems encountered by natural macromolecules.’

Sogo presumes the idea could work on toxins from any venomous animal. He hopes that other groups will try using molecularly-imprinted polymers to make antivenoms: ‘I think the world would benefit from this.’