Four US students, taking part in a program aimed at high school girls interested in engineering, have designed a desalinating water bottle. The currently hypothetical device would be compact and portable so could offer increased accessibility over existing desalinating designs that mimic transpiration.

Laurel Hudson, Gracie Cornish, Kathleen Troy and Maia Vollen met at Virginia Tech’s C-Tech2 program where they were given an assignment to ‘reinvent the wheel’. Choosing to focus on the global water crisis and inspired by drinking straws used by hikers to purify water, they considered if it was possible to make a bottle that produced drinking water from seawater. They reached out to Jonathan Boreyko, an associate professor in the department of mechanical engineering, who was researching synthetic trees at the time. He agreed to help, and, during the height of the Covid-19 pandemic, the group met virtually at night to discuss their research. Along with Ndidi Eyegheleme, a graduate student in Boreyko’s lab, they planned and produced a model to evaluate the inner workings of their design. 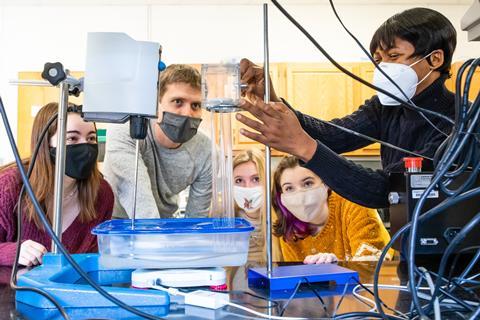 Their design is inspired by mangrove trees, which use thermal and membrane-based desalination techniques to grow in saltwater along shores and estuaries in the tropics and subtropics. It includes an input chamber, which users fill with saltwater, connected to a reverse osmosis membrane. Water filters via the membrane into an intermediate chamber connected to a synthetic leaf. The leaf consists of a nanoporous membrane on a microporous mesh. On evaporation, the water menisci within the pores become concave resulting in a negative pressure difference between the inside and the outside of the surface. This creates suction that can overcome reverse osmosis at the filter, resulting in desalination. 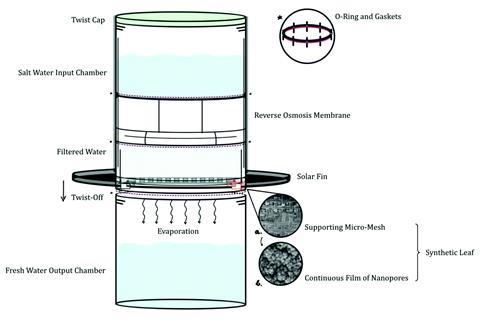 Conceptual design of the transpiration-powered desalinating water bottle. Not drawn to scale

The group says the design has several advantages over existing work on synthetic trees. ‘We added a solar fin around the bottle to accelerate the rate at which the water is flowing through the filter,’ says Boreyko. This would increase the transpiration rate, ensuring the process is faster than previously reported devices. The bottle is intended for personal and community use by people who don’t have sufficient access to clean water; the proposed single column structure ensures the device is portable. Its top-down transpiration pathway means it doesn’t need a feed reservoir, further ensuring a compact design.

‘Desalination technology is extremely expensive and energy intensive,’ comments Onita Basu, an environmental engineering expert at Carleton University in Canada. ‘The methodology that they are working within looks at desalination from a more sustainable perspective by utilising a combination of technology that’s inspired by biomimetics and nature. This would result in a device that would be lower in energy and therefore, more sustainable which is of the utmost importance in developing nations.’

As the design is only preliminary, the obvious next step for the team would be to create a prototype. Constructing a physical device would involve addressing several challenges, including costing the materials to ensure the device is accessible for the intended users.