University chemistry departments across the UK are breathing a sigh of relief as the number of people applying to study chemistry has held steady despite a large increase in tuition fees for degree courses in England and Wales. The total number of applications for chemistry courses for 2012 was 23,724, a drop of only 0.4% on the equivalent point in the cycle last year. For the physical sciences collectively, applications fell by just 0.6%. This contrasts sharply with a 9% decline in the number of applications across all subject areas.

’We have seen a 10% increase in applications this year to date for chemistry courses which is very encouraging,’ says Thomas Tatchell, undergraduate admissions tutor at Cardiff University. ’We were concerned that applications would take a hit but we ran a targeted promotion campaign in the summer before the application cycle opened. We are very pleased our applications have not declined - an increase is always a welcome sight.’

The figures, just released by the Universities and Colleges Admissions Service (UCAS), are further encouragement for chemistry departments, with the degress proving resilient in the face of rising tuition fees and a generally poor economic outlook. If the proportion of applications that translate into accepted places follows last year’s pattern, then some 4500 students should be taking chemistry courses in September. This would put student numbers for chemistry on a par with last year. 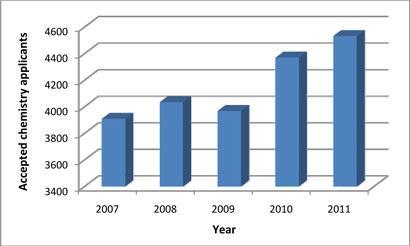 There has been a marked rise in student numbers over the last couple of years after the announcement that tuition fees would rise from just over ?3000 a year to up to ?9000 a year in England and Wales in 2012. It was thought that many students were forsaking deferred entry to avoid the hike in fees.

The strong applications figures for chemistry suggest that the rise in fees is not deterring students and undergraduate admissions tutors around the country appear upbeat. Jonathan McMaster, admissions tutor for chemistry at the University of Nottingham, says: ’We are up this year. Universities in general were waiting to see what would happen with regard to the new tuition fee structure, but clearly we are still seeing keen and enthusiastic students looking at chemistry as a potential career path.’

At Queen’s University Belfast, Nick Fletcher, director of education and a senior lecturer in inorganic chemistry, says: ’In terms of applications we have seen a very positive movement in the last few years, applications are up 22.5% on last year in chemistry and over 50% in the last four years.’ Fletcher adds: ’In terms of the health of chemistry in the UK, I think the public perception is improving and student recruitment does not appear to be following the trends observed across the higher education sector.’

Commenting on the applications figures, a spokesman for the Royal Society of Chemistry says: ’What we can see from the UCAS figures is that physical sciences are holding up extremely well with just a 0.6% fall in applications compared to last year - the lowest fall of all the subject groups. When you compare this to other groups such as mass communications, which has a 14.6% drop in applications, it shows the importance students are placing on a rigorous, challenging degree subject, such as chemistry, with a wide range of career prospects open to them.’