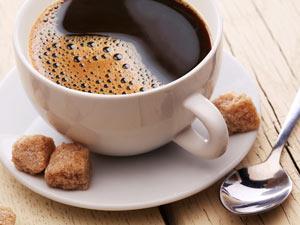 Ever wondered exactly why sugar takes the bitter edge off your morning coffee? A recent theoretical study into caffeinated drinks has dispelled a long-held hypothesis; besides directly masking the flavour of caffeine, additives were found to influence our taste perception via a direct caffeine–additive interaction, rather than affecting the water structure around the caffeine molecules.

Now Seishi Shimizu from the University of York, UK, has investigated the issue with statistical thermodynamics and theoretical physical chemistry. By combining two methods – the Kirkwood-Buff theory of liquids and the classical isodesmic model of caffeine association – he reveals that the major contribution comes from the direct caffeine–additive interaction, not an additive’s indirect effect on water structure, as previously thought. Hence, caffeine dimerisation is suppressed when additives accumulate around individual caffeine molecules, while sucrose promotes caffeine association, thus reducing the bitter taste. Besides simply masking the taste, sugar actively interacts with caffeine to suppress the bitterness.

A physicist by training, Shimizu was attracted to food science by its applicability to the real world and he regularly serves tea and coffee during his tutorials. With a classical background and an everyday interest, he aims to show that ‘the universal unifying principles [of statistical thermodynamics] work everywhere and that food, in spite of its complexity, obeys the same principles.’

Shimizu’s results are consistent with similar investigations on the effects of co-solvents in related areas such as protein folding and interactions according to Alan Cooper, an expert in biophysical chemistry at University of Glasgow, UK. However, Cooper says the results are likely to be controversial. ‘Experimental data suggest that the effects of additives such as sucrose on caffeine dimers in water is only significant at quite high concentrations [>15%] – where bitterness of the caffeine would likely be masked by the sweetness of the sugar.’

As a relative newcomer to the field, Shimizu is only motivated further by these comments, and calls for further research, both theoretical and experimental, into additive-induced dimerisation of caffeine and their effect on perceived taste.