Researchers in the US have shown that a recently discovered class of compound based on light elements can store gas at least as efficiently as the most promising metal organic framework (MOF) candidates.

The compounds, known as covalent organic frameworks (COFs), bring the prospect fuel tanks of the future consisting of a lightweight crystalline sponge that can hold large volumes of hydrogen or methane a step closer.

Gas storage is fast becoming a key issue in energy policy, both for cleaner fuels, such as hydrogen and methane, and for locking away carbon dioxide. In 2005, Omar Yaghi’s team at the University of California, Los Angeles described a new type of porous crystal made solely from light elements - hydrogen, boron, carbon, nitrogen and oxygen. These materials are similar to previously described MOFs, which have been shown to have exceptional gas adsorption properties, but because COFs do not contain metal atoms they are less dense. ’While this is one advantage, what we are really doing is extending the range of possible materials for these kinds of applications so that there are a number of alternatives that could be used in different situations,’ says Yaghi.

COFs consist of building blocks of five- or six-membered rings arranged into sub-units, which are then bolted together with strong covalent bonds to create large crystalline frameworks with pores ranging in size from 9 to 32

. Now, Yaghi and colleague Hiroyasu Furukawa have reported how much hydrogen, methane or carbon dioxide a series of different COFs are capable of soaking up. Some of the COFs tested have adsorption capacities that surpassed those of MOFs. ’Our findings place COFs among the most porous and best adsorbents for these gases,’ Yaghi says. 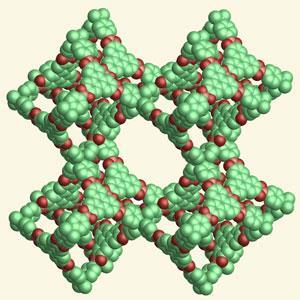 The structure of COF-108, composed of light elements and boasting the lowest density ever reported for a crystalline solid

It should be relatively straightforward to scale up production of the materials, according to Yaghi. ’There are no exotic molecules involved so cost should not be prohibitive, and we have made multi-gram quantities in the lab, so industry should be able to scale up far more.’

Andy Cooper, director of the Centre for Materials Discovery in Liverpool in the UK, says that the team’s results are ’significant’. ’These materials have spectacularly high surface areas and show amongst the highest uptakes for hydrogen, methane and carbon dioxide,’ he says. However two big issues remain to be tackled, Cooper points out. The first is to make any new material so much more efficient than carbon that the extra cost can be justified, and the second is to overcome the problem of hydrogen’s low heat of sorption - the fact that for it to ’stick’ within framework materials it needs to be cooled to liquid nitrogen temperatures.