Researchers in the US have engineered yeast cells to produce large amounts of proteins containing unnatural amino acids (UAAs) - a feat that has previously only been possible with bacteria. The work should allow scientists to study these proteins in yeast - which have ’eukaryotic’ cells more closely resembling those of animals and plants.

All living organisms normally make proteins from 20 ’natural’ amino acids but proteins containing synthetic UAAs can have potentially useful biological properties. Some fluoresce, allowing them to be tracked through cells, while others have been touted as possible therapeutic agents. But while a litre of engineered bacteria can produce tens of milligrams of these modified proteins, yeast cells only produce a few micrograms because they have sophisticated mechanisms that prevent ’foreign’ proteins from being made.

Now, Lei Wang and Qian Wang at the Salk Institute in San Diego, California have found a way to make yeast cells produce these proteins in larger amounts.

’People have learned how to put unnatural amino acids into proteins in bacteria quite well - but not in eukaryotic cells,’ Lei Wang says. ’If you want to be able to study protein function in these cells, you need the amino acid to be incorporated with high efficiency.’ 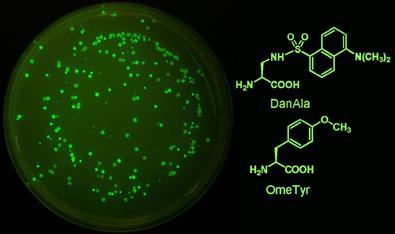 The researchers adopted a two-pronged attack to solve the problem. Firstly, they engineered their yeast so that it could make a key molecule involved in UAA manufacture, bacterial transfer RNA, much more efficiently. Then they removed some of the yeast’s cellular error-detection machinery. This normally stops yeast from producing UAA-containing proteins by breaking down ’foreign’ messenger RNA carrying genetic information from the nucleus to the ribosome, the cell’s protein factory.

’The result is that by using these two approaches we have increased by 300 times the amount of protein containing the UAA that can be obtained from yeast cells. These are quantities that are useful if you need to purify the proteins for therapeutic or industrial purposes,’ says Wang. The team managed to produce proteins containing two different UAAs - DanAla and OmeTyr.

Thomas Magliery, a protein expert at Ohio State University in the US, says, ’This is an interesting biotechnological advance because it suggests a way to produce proteins containing unnatural amino acids in process-scale quantities directly from eukaryotic cells and therefore with modifications which may be critical to function, stability or immune response.’

The use of UAAs as probes has been limited because eukaryotes don’t produce proteins containing them in large enough quantities, Magliery says. ’The approaches described here will potentially remove that limitation for a wide range of chemical biology experiments in yeast and mammalian cells,’ he adds.