A superconducting layer can be formed between two materials that are not superconductors, Japanese scientists discover

Scientists in Japan have made a ’superconducting sandwich’ from two materials are not superconductors in isolation. The technique could be used to make electronic circuits with extremely low power consumption, the researchers suggest.

A team led by Masashi Kawasaki of Tohoku University fabricated a transistor by depositing electrodes on a surface of potassium tantalum oxide (KTaO3). This was then covered with a drop of an ionic liquid consisting of diethylmaleic acid ester (DEME) cations and boron tetrafluoride anions. It has been shown in the past that when a drop of an ionic liquid is placed on KTaO3,  a double layer forms at the interface with a gap of around 2nm. When a voltage is applied across this gap, charge accumulates electrostatically on either side, making the component analogous to a capacitor.

The researchers gradually lowered the temperature of the system and measured the conductivity across this gap. 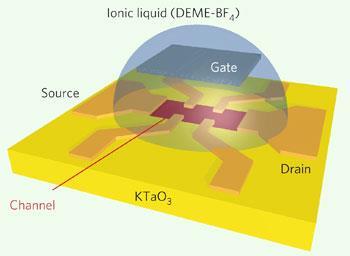 ’First, it is totally insulating, then semiconducting,’ says Kawasaki. ’Next, it becomes metallic, and then it becomes superconducting when the temperature reaches 0.005K - very close to absolute zero.’ Although the ionic liquid freezes at around 200K (-70?C), once the voltage is applied, the charge remains confined to the solid near to the surface. ’Zero resistance could be useful for low power consumption logic circuits,’ Kawasaki says.

It seems that when the system is charged, electrons from the electrodes migrate to one face of the gap; as the temperature drops these electrons can move more freely until, eventually, a state of zero resistance is reached.

’This is not just adding another superconductor to the list,’ Kawasaki says. ’We have developed quite another way to discover new superconductors, not with chemical doping but with electrostatic doping.’

Matthias Eschrig, who researches interface phenomena at Royal Holloway, University of London, UK, says, ’This is a breakthrough in tuneable devices that allows superconductivity to be switched on and off. The idea of using an electric double layer that naturally forms at an interface between an electrolyte and a solid in order to achieve high electric fields is crucial and the same technique might be applied to other systems, leading to a high potential of applications. There is a plethora of new phenomena to be discovered if the suggested method could be applied to a wide range of materials.’