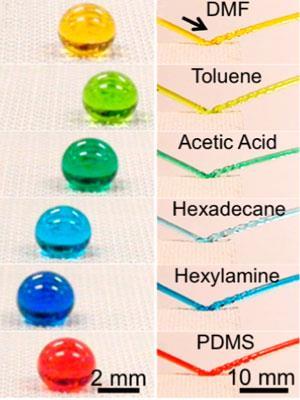 The surface repels both ordinary and non-Newtonian fluids

A material that is equally good at repelling water, oil, concentrated acid and alkali solutions, and non-Newtonian fluids like polymer solutions has been created by chemists in the US. This chemical resistance combined with the simple, scalable production process makes it promising for protective and self-cleaning surface applications.

Anish Tuteja from the University of Michigan in Ann Arbor explains that while a lot of effort has been directed towards creating ‘self-cleaning’ superomniphobic surfaces that repel both oily and water-based liquids, less attention has been paid to non-Newtonian fluids.

Viscous substances like custard, honey and solutions containing polymers change the way they flow depending on the forces applied to them. They can also absorb a lot more energy by deforming when they hit a surface. ‘It’s very hard to get non-Newtonian liquids to bounce off surfaces,’ Tuteja explains. Even adding 0.2wt% of a polymer to water can make a droplet stick to a surface where pure water droplets would bounce off, he says, ‘but in this case, even at concentrations of 10–20wt% polymer we can still get droplets or jets of these solutions to bounce off’.

‘Normally when people talk about superhydrophobic or superomniphobic surfaces, they talk about wetting, which is a measure of the shape that droplets make on the surface and their contact angles,’ says Sergiy Minko, who researches smart polymer materials at Clarkson University in Potsdam, US. In a static system wetting is independent of the viscosity and rheology of the liquid. But as soon as any force is applied, for example when trying to remove a droplet from a surface, it becomes very important.

The crucial aspect of Tuteja’s surface, Minko says, is that it has a very low wetting hysteresis, which means that as a droplet rolls over the surface, the contact angles at the front and rear of the droplet are almost the same, so the droplet does not deform very much. ‘This means the rheology has less impact,’ he adds, which is why the surface can repel Newtonian and non-Newtonian fluids equally well. However, he also points out that many people who work on similar materials may simply not have tested them with polymer solutions, as it is perhaps not related to the application they have in mind.

The surfaces are also highly resistant to chemical attack. Tuteja and his group covered one side of aluminium plates with their material and dunked them into baths of concentrated hydrochloric acid and sodium hydroxide. The uncoated sides of the aluminium were quickly attacked, but the coated surfaces were completely protected (see video). 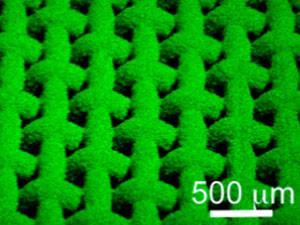 All of these properties stem from two aspects of the material’s construction, Tuteja explains. The material is based on a fine stainless steel wire mesh. This is coated with a layer of polymer beads, made from a mixture of polydimethylsiloxane (PDMS) and fluorodecyl polyhedral oligomeric silsesquioxane (POSS). The roughly spherical shape of the beads gives the surface the overhanging geometry required to make it superomniphobic and also means it traps a layer of tiny pockets of air, which prevents the acid or base from coming into contact with the surface, so it can’t react. The fluorinated POSS molecules also migrate to the surface of the beads, lowering the surface energy and enhancing the chemical resistance.

The main drawback of this coating, Tuteja admits, is that it is not very mechanically robust. ‘If you scratch it too much, it does peel off, and that’s a big problem with a lot of coatings of this type,’ he says. ‘However, we’re working on a new generation of coatings which is much more mechanically durable.’