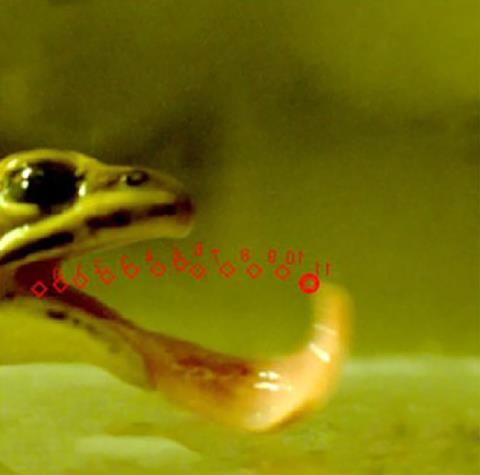 Source: © Journal of the Royal Society of Interface

The exceptional stickiness of a frog’s tongue – which can grab a flying insect out of the air at high speed or pull up to 1.4 times the animal’s body weight – has long puzzled scientists. But US researchers now say they have figured out the underlying cause.

David Hu’s group at the Georgia Institute of Technology studied the tongues of a number of frog species in detail, using high speed cameras and various material tests. Rheology experiments revealed that the ability of a frog’s tongue to adhere strongly to an uneven surface like an insect in a very short time was partly down to its non-Newtonian shear-thinning saliva. The frog’s spit spreads quickly over an insect during impact, then stops moving and ‘grips’ as the tongue is retracted. The tongue itself is also extremely elastic and acts as a shock absorber, absorbing the energy when the tongue hits an object, preventing it from bouncing away.

The group hopes its observations could contribute to the design of new adhesives inspired by frogs.