Surface reactions can be controlled by bulk stoichiometry

Bulk properties have an unexpected impact on surface reactivity, new research has shown. With applications as wide-ranging as catalysis, energy storage and structural engineering, this new mode of reaction control could have significant implications across the applied sciences.

Despite their ubiquity in everyday life, surfaces present an interesting chemical problem. ‘We can define the bulk as atoms that are bonded to their neighbours just like any other atom far away from the surface. But surface atoms, they have dangling bonds which means they have very different properties,’ explains Izabela Szlufarska, a materials scientist from the University of Wisconsin, US. Surface reactivity has therefore traditionally been understood as a consequence of how atoms interact at the reactant–material interface, with reaction control limited to structural and electronic modifications of the top layer atoms.

However, new simulations by Szlufarska and her Wisconsin colleague Jianqi Xi have revealed that certain bulk properties can also influence surface reactions. Using ab initio molecular dynamics, the duo modelled a hydrogen scission reaction at the surface of amorphous silicon carbide and, by varying the stoichiometry of the system, were able to tune the elastic properties of the bulk material. During a reaction, atoms below the surface must move to accommodate surface intermediates, meaning more elastic bulk systems are better able to facilitate these reactions. This elasticity is directly dependent upon the bond strengths within the structure: the carbon-rich system contains many strong carbon–carbon bonds, making the resultant bulk material stiff, whilst the silicon-rich system is far more elastic owing to the prevalence of weaker silicon–silicon bonds. 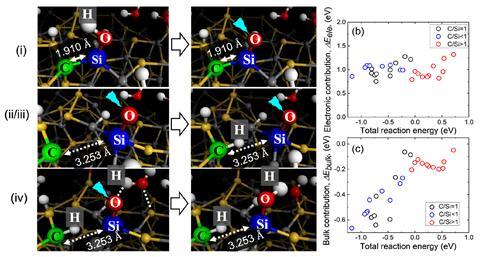 Szlufarska then determined the effect of these bulk modifications by measuring the reaction energy for each different stoichiometric system. ‘Jianqi came up with a really creative approach to these calculations which enabled us to separate the electronic energy contributions from the mechanical contributions arising from the stiffness,’ she explains. By isolating these mechanical effects, Szlufarska and Xi established that the stiffer carbon-rich system had a higher reaction energy barrier, owing to the greater amount of energy required to deform the bulk structure as surface intermediates formed.

It’s a nice piece of work,’ comments Stephen Jenkins, a theoretical surface chemist from the University of Cambridge, UK. ‘But these mechanical contributions are probably still within the top few atomic layers so it’s still broadly a surface effect, rather than the entire bulk material.’ Szlufarska agrees that this is likely to be a localised effect. ‘It’s typically within a few nanometres of the surface,’ she explains. ‘What’s important is that this region doesn’t have surface properties.’ Regardless of the range, this could still be a valuable tool for surface chemists as bulk properties are much easier and cheaper to control than surface ones.

‘These computational methods are becoming so powerful that they can really tell the experimentalist what is interesting to investigate,’ says Andrzej Kotarba, an experimental surface chemist from Jagiellonian University in Poland. ‘It’s an inspirational paper but what is important is that nowadays you can verify the simulations by experiment, and this is actually what is lacking here.’ The duo is keen to work hand in hand with experimentalists and hope that other researchers will take this idea and test it on their own systems. ‘We believe that this is a broader phenomenon,’ says Szlufarska. ‘Our plan is to see how this will apply to other materials or classes of materials, with a view to developing applications in catalysis. We hope that it’s going to open up the doors for controlling chemical reactions in a new way.’