The human fingertip can sense single atom substitutions in a surface

The human fingertip can not only perceive subtle differences as small as single atom substitutions in silane monolayers, but can also detect differences in a polymer’s crystallinity. The research out of the University of Delaware was presented at the American Chemical Society’s (ACS) spring conference held virtually and in-person in San Diego, US. 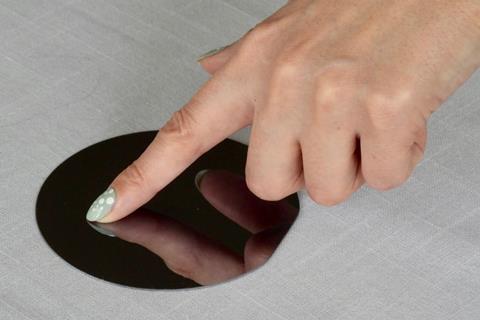 These discoveries could help recreate human tactile sense in a way that has applications for areas like virtual reality (VR), human machine interfaces, soft robotics and rehabilitation following an accident.

During touch, the friction generated between the finger and an object produces different types of mechanical vibrations that together form a tactile perception, explained Charles Dhong, a material scientist at the University of Delaware who led the research.

Most haptic devices, also known as touch-based interfaces, rely on reconfigurable bumps or electrical stimulations that buzz the user, but he is working on creating tactile sensations through materials chemistry. ‘When you touch an object, you’re feeling its surface, and you can change how it feels by changing the friction between that surface and your finger. That’s where the chemistry comes in,’ Dhong said. ‘We think materials chemistry could open the door to recreating more nuanced sensations, whether you’re designing a surface to feel a certain way, or creating feedback devices for VR.’

The structure of the molecules within a substance and the properties of its surface influence the sensation of touching an object. Consequently, the University of Delaware team theorised that by altering only chemistry-related features, the surface of an object would feel different.

Dhong’s previous work had study participants touch single-molecule-thick layers of silanes – compounds containing only silicon and hydrogen – and it turned out that they could differentiate them based on slight changes in friction caused by chemical differences, including the substitution of one atom within each silane molecule with an amine. But his new study demonstrates that our sense of touch can also identify chemical changes as small as swapping a nitrogen atom for a carbon atom.

‘Even though we show that it is a single atom substitution, we are really talking about multiple length scales of phenomenon here,’ Dhong explained. ‘That small change in the chemical structure gives rise to the difference in molecular forces, which gives rise to these changes in friction, which you ultimately perceive.’

Dhong’s team also performed experiments that focused on the perceived texture of thin layers of polymers with identical formulas and molecular weights, but different degrees of crystallinity. As in silanes, the study subjects were able to differentiate between the polymers based only on variations in the friction resulting from slight changes to the crystallinity of the molecules.

‘Even these subtle changes in crystallinity – so we are talking about molecules that have the same molecular weight, same structure, but they have different stereochemistry and we are using different processing conditions – we found that people can actually tell differences in crystallinity in polymer films,’ Dhong recounted.

In terms of future applications, he hopes that these findings can be combined with existing tactile aids to make them higher contrast. ‘If we think about VR applications, there is still this limitation of the number of different tactile sensations that these bumps or buzzers can make,’ Dhong said. He envisions a scenario where some of his discoveries can be adapted to a new system, for example an electronic glove, that can allow greater tactile sense through electrical control.

Dhong pointed out that the technologies currently available to people with low vision and blindness, for example, don’t have the same kind of information density as a visual graphic. ‘Also, if you have low vision and blindness, can we develop better technologies to close the gap between Stem education, making abstract concepts a little more accessible.’

Roberta Klatzky, a professor of psychology and human-computer interaction at Carnegie Mellon University in Pennsylvania, US, finds it fascinating that such tiny modifications to a surface can yield changes in the perception of touch. ‘It is a surprise how little you have to change a surface in order to get detectable effects, and it is very interesting that people can pick up chemical composition by virtue of the frictional changes,’ adds Klatzky, who has studied the human perception of touch for decades but was not involved in the research. She suggests that beyond friction, thermal changes may also play a role in the phenomenon reported by Dhong and colleagues.