Researchers at the California Institute of Technology, US, have shown with both spatial and temporal resolution, how the electric field around a nanoparticle changes when the nanoparticle is excited by a laser. The ultrafast technique is only possible by coupling the femtosecond laser pulses to an electron probe so that some of the electrons arrive at the right time to surf crests and troughs of the electric field.

When excited with visible light, metals like gold and silver can have their plasmonic modes excited causing electrons to oscillate. This motion creates a pattern of electric fields both inside and outside the metal. But what happens when the particles of metal are smaller than the wavelength of light exciting it?

To investigate this, chemistry Nobel laureate Ahmed Zewail, with postdocs Aycan Yurtsever and Renske van der Veen, developed a way to use the same laser pulses that excite the plasmonic field to activate a photo cathode and create the femtosecond electron pulses that Zewail’s lab is famous for. This meant the timing was just right for some of the electrons to interact with the moving electric field that the laser produces. 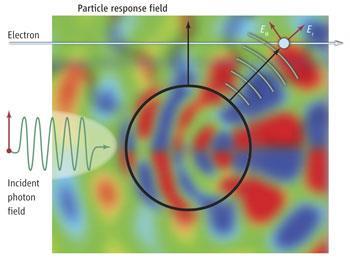 Just like surfers, electrons that were just ahead of an electric wave ’caught the wave’ and gained energy, and those that came just after, lost energy in the corresponding minimum. As the probe scanned across, the movement of the electric wave could be plotted. ’It was fascinating to see how these particles "light up" in a spatial and temporal world that was impossible to explore before,’ explains Yertsever.

The technique is similar to electron energy loss spectroscopy (EELS), where electrons lose energy to the material as they excite it, but now some of the electrons gain energy as well. ’The mathematics is kind of neutral to whether you gain or lose energy,’ explains Phil Batson, who works on EELS at Rutgers University in New Jersey, US. ’We’ve hunted for many years to get energy gain and have come up empty and the reason is to do with the timing of where the electron is when the plasmon is propagating.’ In the past, explains Batson, the electron has always lagged behind slightly, which is why, until now, only energy loss has been measured. ’You’re never going to be lucky enough to see [energy gain] unless the timing is controlled,’ he adds, which is what makes this new technique so useful.

The technique will allow the team to look at how light is localised, scattered and enhanced around plasmonic nanoparticles, Yertsever says. ’The electric field enhancement at the nanoscale is especially important for various technological applications such as single molecule sensors, green-energy devices (solar cells) and computer chips,’ he adds.

But Yertsever adds that the team think the implications of this work are much broader and not limited only to the probing of electric fields. ’It is an achievement that allows us to capture the ultrafast events with very high spatial precision and resolution. We can point our ultrafast probe, for instance,  to the left corner of a nanoparticle or a biological cell and observe the birth, the first "moments" (or "femtoseconds"), of various phenomena. And there are plenty of phenomena,’ he says.