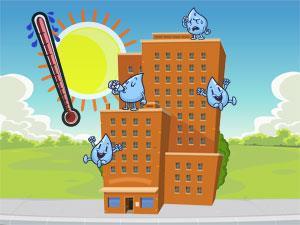 Thermoresponsive hydrogel roof coverings that absorb and then ‘sweat’ out rainwater could slash air conditioning CO2 emissions. Wendelin Stark’s team at the Swiss Federal Institute of Technology, ETH Zurich, estimate that this passive cooling could lower CO2 emissions produced by building air conditioners by at least 60%.

Considering how best to efficiently lower building temperatures, Stark and his team were intrigued by sweating’s effectiveness at cooling humans. ‘Water is perfect, because it has -2MJ/kg of evaporation energy,’ Stark tells Chemistry World. ‘We wanted water to stay on a building until needed for cooling.’ They calculated that a 5mm thick layer of water would be enough to cool a building on a sunny afternoon. They first tried a conventional poly-hydroxyethylmethacrylate (pHEMA) hydrogel to store it. However, putting layers of pHEMA onto model roofs and subjecting them to cycles of simulated rain and sun found in tropical countries proved disappointing. ‘The top layer dries out and water only escapes slowly,’ Stark said.

To mimic sweating more closely, the scientists then sought materials that would force water out as they warmed. One option was thermoresponsive poly(N-isopropylacrylamide) (PNIPAM) that undergoes a phase transition at 32°C, thereby releasing absorbed water – but it is normally water soluble. Increasing crosslinking between polymer backbone chains would reduce PNIPAM’s water solubility, but also makes it less thermoresponsive. 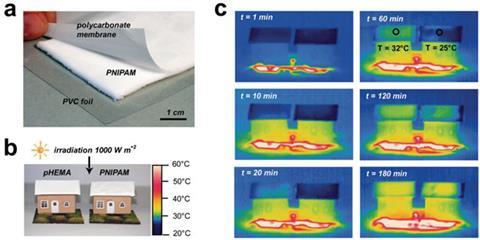 With a 5% crosslinker content, Stark’s team's polymer balanced robustness and thermal switching behaviour. Their polymer reversibly stores 90% of its weight in water, keeping the polymer’s surface temperature in simulated sunlight at around 35°C until the water evaporates. After that, the model roof’s temperature quickly increases to 60°C. By contrast, the temperature of a pHEMA covered roof  rose rapidly to 45°C, then more slowly to 60°C. To study emission reductions, the researchers compared the energy used keeping an air conditioned house at 20°C when its bare roof was 60°C with a hydrogel covered roof that was only 35°C. The building with the bare roof would emit 220 kg/CO2/year if the electricity was generated by a gas-fired power station, while the building with a hydrogel coated roof would emit just 80 kg/CO2/year.

Paul Topham, who studies smart polymers at Aston University, calls this work ‘ingenious’. ‘Their innovative coating is truly promising for a sustainable future, potentially reducing energy consumption in countries that are currently heavily reliant on air conditioning,’ he says. Meanwhile, Stark says he doesn't plan to commercialise the technology. But he does note that by publishing it he’s stopped others patenting it, leaving tropical countries with regular rain showers free to try it out.