Chemists in the US have developed a new way to turn the sugars glucose and fructose into a potentially useful chemical feedstock. The work reflects a concerted global effort to identify ways of converting plant-derived molecules, especially cellulose, into replacements for petrochemical feedstocks - the biorefinery concept. 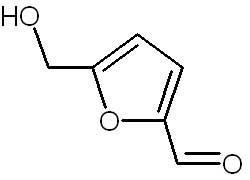 Haibo Zhao and colleagues at the Pacific Northwest National Laboratory in Richland, Washington, used metal chlorides in ionic liquid solvents of the class 1-alkyl-3-methylimidazolium chloride to catalyse the conversion of the sugars to 5-hydroxymethylfurfural (HMF). HMF is widely viewed as a potentially versatile replacement for petroleum-derived precursors for a range of products. Current HMF production techniques rely on acid catalysts and are generally limited to fructose. Acid catalysts are problematic because HMF decomposes under acidic conditions to form levulinic acid and formic acid. Levulinic acid is especially difficult to separate from HMF, increasing production costs.

Zhao’s team found that, using their ionic liquid system, chromium (II) chloride was an effective catalyst for converting glucose to HMF with a yield of nearly 70 per cent and with negligible production of levulinic acid.

’Our method is distinguished from previous reports in that we observe high yields of HMF from fructose without added acid,’ the research team reported in Science. ’Even more importantly, one of these solvent-catalyst systems is able to produce HMF in high yields from glucose, the first step in our ultimate goal of developing a system to generate HMF from complex biomass such as cellulose.’

James Clark, who leads the Green Chemistry Centre at the University of York, UK, told Chemistry World, ’There is a definite need for more research effort on low environmental footprint methodologies for converting biomass into useful chemical products and intermediates.’ However, warned Clark, the use of ionic liquids is a potential concern. ’Ionic liquids are not really fully proven in the green arena,’ he said.