Peptide-based surfactants can act reversibly - but at a price

Researchers in Australia have developed a switchable detergent that could transform laundry day by washing out of clothes with hardly any need for a rinse cycle. The surfactant can stabilise emulsions and foams then, by adjusting the pH or adding a metal chelating agent, the emulsion can be made to separate or the foam to collapse within seconds. The research was presented to the meeting of the American Chemical Society in Boston today.

’There are a vast number of products and processes in industry where the control of the stability of emulsions and foams is incredibly important,’ said Annette Dexter of the University of Queensland, who with colleague Anton Middelberg invented the system. ’One of the possible applications that we are aware of is a surfactant that would switch between the wash cycle and rinse cycle during clothes washing, which would mean you could remove visible suds without having to use as large a quantity of water.’

The researchers designed a peptide 21 amino acids in length with a hydrophobic face and a hydrophilic face. At an oil-water or air-water interface the peptides spontaneously align. The presence of a metal ion such as zinc enables the peptides to cross-link through metal ligation between the peptide and ion. ’By forming this layer at the interface, the peptides stabilise an emulsion, preventing oil droplets from coalescing,’ Dexter told Chemistry World. ’Similarly, bubbles of water in a foam are also stabilised.’ 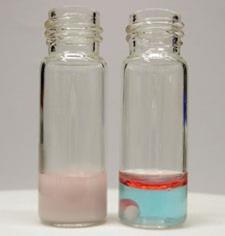 Source: © Courtesy of Annette Dexter, the University of Queensland

The tube on the left shows the original emulsion, while the one on the right shows the rapid separation of the emulsion into oil and water after a newly developed "switchable" detergent is added.

It is simple to remove the metal ion by, for example, lowering the pH to let protons replace the metal ion linking the amino acids. Alternatively a metal chelating agent can be added. ’When you do this the emulsion or foam collapses within seconds,’ said Dexter. ’If you then add more metal or neutralise the solution, the emulsion can form once more. So the system is switchable, reversible and rapid.’

Because of the ubiquity of emulsions and foams in products and processes, Dexter is confident that the system will find applications. ’Also, the fact that we are using peptides means that any product is likely to be biologically benign,’ Dexter said. ’One example might be in personal care products, for example, where the emulsion in the bottle destabilises upon contact with the pH of the hair or skin.’

The main obstacle to getting the detergent to the market is the price tag. The peptide surfactants currently cost around $US500 per kilogram to produce, compared to $10 for conventional surfactants. ’We are looking at ways of reducing the cost of production, or else it might be possible to use small amounts of the peptide product to add functionality to existing emulsion systems,’ Dexter said.

The researchers have launched a company to investigate applications and markets for the peptide-based surfactants and are talking to a number of potential commercial partners.