Chemists have synthesised resveratrol oligomers, polyphenols found in grapes, which might have medicinal properties

US chemists have discovered how to selectively synthesise a wide range of natural polyphenol compounds based on resveratrol, a stilbenoid consisting of three phenols on two aromatic rings linked by a short hydrocarbon chain. Controlled synthesis of these compounds will allow researchers to probe their possible health benefits.

Resveratrol and its many derivatives are present in the skin of grapes, for example, and are thought to be responsible for some of the apparent health benefits of red wine. These health benefits may help to explain the ’French paradox’ - a low incidence of coronary heart disease in the population, despite a diet high in saturated fat. 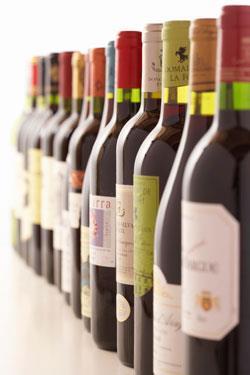 However, while much effort has been devoted to studying resveratrol, its oligomers, consisting of a number of resveratrol units linked in various configurations, have not been as thoroughly probed. This is partly because isolating the oligomers is both costly and time-consuming - processing hundreds of kilograms of dried plant material often yields only a few milligrams of a single product.

Now, Scott Snyder, Andreas Gollner and Maria Chiriac at Columbia University in New York have shown how a variety of resveratrol oligomers can be selectively produced, some in quantity, which will enable a much more focused and systematic study of their potential as medicines.

In earlier work, the team developed a way to create many of the dimeric members of the resveratrol family. However, each of these dimers has multiple potential points of attack for the subsequent attachment of additional resveratrol monomers. One dimer, for example, has four apparently identical hydrogens available for reaction. The team discovered, however, that these hydrogens behave differently when presented with electrophilic bromine reagents. Reacting the dimeric core with N-bromosuccinimide resulted in a bromine substitution at one specific hydrogen, followed by another specific hydrogen. In this way a bromine ’handle’ for adding extra resveratrol units can be placed in one position or in two positions in a controlled manner.

In an attempt to add resveratrol monomers at different locations, the team experimented with a range of brominating reagents. Eventually a compound called bromodiethylsulfide bromopentachloroantimonate (BDSB) was found to solve this problem.  Using this reagent, a single resveratrol dimer can be primed to accept further monomers in multiple positions in a controlled and directed way.

’Unlike many syntheses which result in only a single product, this approach allows us to generate an entire family of structures,’ says Snyder. ’This may allow people to move beyond looking solely at  resveratrol and extend biochemical studies to rationally probe these more complex natural products,’

Sharon Rossiter, a medicinal chemist at the University of Hertfordshire in the UK, says that the Snyder group’s approach ’has enormous potential both for the synthesis of other complex architectures and for evaluation of these exciting natural products in drug discovery’.