New, artificial catalysts not quite up to nature's standard

Scientists in the US have designed and built an artificial enzyme from scratch. Their computer-based creation is a relatively feeble catalyst compared to natural enzymes, but the feat illustrates how new, bespoke enzymes might be designed for any chemical reaction, providing their efficiency can be improved.

Lin Jiang from the University of Washington in Seattle and colleagues set about designing an enzyme that would cleave a carbon-carbon bond in a molecule not found in nature - in other words, a reaction for which no naturally occurring enzyme exists. The cleavage they chose was the removal of an acetone side-chain from a naphthaldehyde - a retro-aldol reaction, whose mechanism is well understood.

The reaction requires 12 distinct steps, each one producing a new intermediate or transition state of the molecule. Some of these transition states needed to be stabilised to encourage a subsequent reaction; this job, together with electron movements and proton transfers involved in the reaction, was mediated by amino acids and water molecules in the enzyme’s active site.

After building a composite model of a few key transition states involved in the reaction, the team were able to design a number of possible active sites that would carry out all the necessary functions. They then selected a number of ’scaffold’ proteins of around 200 amino acids, which they calculated would be able to accommodate an active site without clashing of molecular structures. 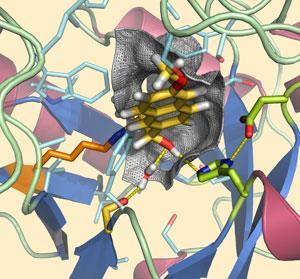 ’After a lot of computation we ended up with around 1000 enzymes that according to the calculations would work,’ says team member Eric Althoff. ’We synthesised 72 of these.’ Of these, 32 showed catalytic activity. The most efficient had an activity 10,000 times greater than the uncatalysed reaction. However, a similar enzyme in nature would work a million times faster than this. ’While our rates might not be that impressive, to get activity where there was previously none is a big achievement,’ Althoff says. ’It is the initial hit that is difficult - then you can start to modify things to get big improvements.’

John Mitchell at the University of Cambridge says that while the rates of catalysis achieved by the new work were ’modest’, the results nevertheless represent ’a significant step, and exciting possibilities lie in the future.’