US researchers have ’cured’ obesity in mice by injecting them with a synthetic peptide that simultaneously mimics two naturally occurring hormones. The weight loss in the mice has been described as ’staggering’, and opens the prospect for the development of a drug treatment for obesity in humans - something that has so far proved elusive.

The synthetic molecule possesses key features of two natural peptide hormones, glucagon and glucagon-like peptide-1 (GLP-1), which are involved in regulating glucose metabolism and appetite control. When injected into obese mice, after one week the animals’ body weights had decreased by 25 per cent and their body fat by 42 per cent. Repeated treatment resulted in greater effect.

While both peptides are known to suppress appetite, glucagon has the effect of raising blood glucose while GLP-1 lowers glucose in the blood. The researchers, led by Richard DiMarchi of Indiana University, postulated that if both hormones were administered at the same time, the risk of glucagon dangerously elevating blood glucose levels could be negated by the effect of GLP-1.

The two peptides are similar but differ in a few crucial aspects. The research team engineered a new peptide that retained the key features of each. They had to introduce a cyclic amide functionality in the peptide chain to stabilise its helical structure, and they bolted a huge polyethylene glycol group onto the molecule to prevent it from being filtered away by the kidneys. ’We found that if you make a few judicious modifications in the molecule you get a hormone that has full potency at both the glucagon receptor and GLP receptor,’ says DiMarchi. ’We did not have to dumb the molecule down at all to make it a co-agonist - it was fully functional at both receptors.’

Structure of the glucagon-based peptides

When the drug was injected into obese mice, massive weight loss was observed. ’Over a period of four weeks you can see these animals, which are about double normal size, return to their normal phenotype,’ DiMarchi says. ’This is absolutely spectacular.’ 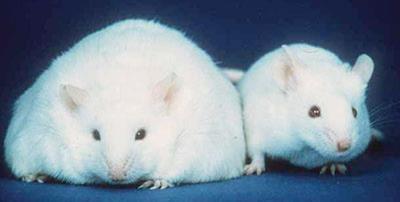 One week after being injected with the synthetic peptide, obese mice had lost a quarter of their body weight

Further investigation showed that the GLP component of the drug was mainly suppressing appetite, while the glucagon was working to stimulate the burning of calories. DiMarchi says that it remains uncertain whether both these mechanisms would be seen in primates, but that it is ’something we are committed to finding out.’

Terry Herbert, who researches the role of GLP-1 in diabetes at the University of Leicester in the UK, says that the US researchers’ construction of the peptide hormone with dual activity is ’a technical tour de force in itself.’ Herbert adds, ’This is potentially very exciting. The idea that a single dose of a peptide could lead to this incredible weight loss is staggering.’ However, a lot more work is required to discover if similar benefits can be seen in humans, and to assess possible side-effects, Herbert says.