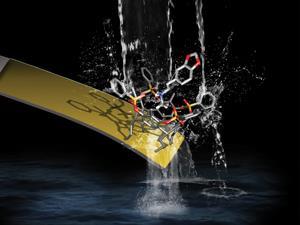 Crime fighters could soon have a new method to detect illegal drugs thanks to researchers in Italy. The team has succeeded in grafting an artificial receptor – capable of identifying a whole family of methamphetamine drugs rather than just one – onto a microscopic silicon springboard that flexes when the receptor hosts a relevant guest drug molecule.

The new approach could be useful for tackling so-called designer drugs, in which minor modifications are made to an existing drug. While these are currently not illegal in many jurisdictions, moves are afoot to outlaw them. This will present a challenge for the authorities when it comes to identifying these substances on the street. While assays exist for the currently illicit substance, the same test may not be able to identify a related designer drug.

Now a team led by Enrico Dalcanale of the University of Parma and Paolo Bergese of the University of Brescia has developed a sensor which responds to the portion of the methamphetamine molecule that is common to the entire family. The core of the sensor consists of a bowl-shaped supramolecular structure containing four phosphonate residues. This class of compound is termed a cavitand, and is capable of acting as a host to a variety of guest molecules, which bind non-covalently, such as through hydrogen bonding and hydrophobic interactions. X-ray diffraction studies show that the cavity of the team’s tetraphosphonate cavitand specifically recognises +NH2–CH3 residues – the common structure of methamphetamine salts – and to a lesser extent +NH–CH3 , present in cocaine.

The team used photochemical methods to graft the cavitand receptors onto the surface of a micrometre-scale silicon microcantilever. When a guest molecule binds to the receptor, an exchange of energy occurs at the surface of the cantilever causing it to deflect – movement that can be picked up and quantified by a laser. Using samples of drugs seized by police on the streets, the system was shown to respond to a number of methamphetamines and to cocaine, but not to substances that the drugs are often ‘cut’ with, such as caffeine or sugars.

‘We have demonstrated that it is possible to build a device which is capable of detecting the entire class of methamphetamines with extremely high selectivity in water,’ says Dalcanale, adding that the system could also be used for environmental monitoring of drugs in, for example, wastewater.

Dermot Diamond, director of the National Centre for Sensor Research in Ireland, applauds the team’s achievement in successfully immobilising the receptor on the cantilever and for being able to distinguish the sample drugs from sugars. However, Diamond adds: ‘Detecting illicit drugs and their residues in wastewater is a very challenging proposition for a sensing device of the type they have produced. This is because the complexity of the same, and the range of potential interferents, goes way beyond what the authors have tested.’